THE PULP CALENDAR: May 10 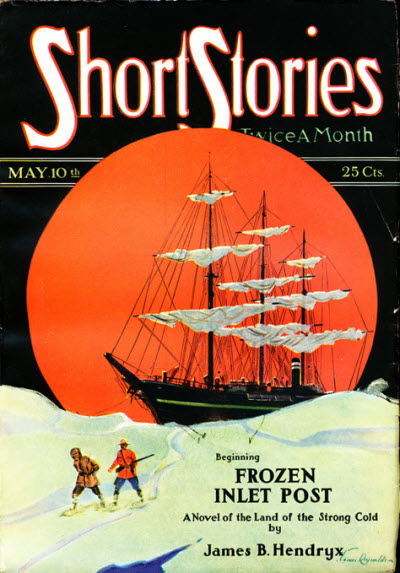 Through the 1920s, Short Stories usually placed its cover art against a white background dominated by its red sun motif. A certain monotony resulted from all the whiteness, but there were dramatic exceptions like this 1927 cover by James Reynolds. A massive midnight sun advertises a James B. Hendryx Alaska serial against a midnight background. I'd be most interested in the short story by J. D. Newsom, "Fried Chicken," but J. Allan Dunn's novelette "The Valley of the Wind" is likely to be good stuff, too. I recognize Robert Pinkerton ("The Jug of Faith") S.B.H. Hurst ("The Pirates of the Irawaddy") and Hapsburg Liebe ("The Belled Ghost") among the other authors, but railroad story specialist Harry Bedwell ("The Lightning That Was Struck"), Bruce Johns ("Snitch"), A. H. Miller ("Shifting Cargo") and Paul Sand ("The Galloping Clue") are mostly if not entirely unknown to me. Miller's story, for instance is the first of only two he published in pulp, both in Short Stories. The mix of authors and intriguing titles plus that terrific cover make this one an issue I wouldn't mind reading someday.
Posted by Samuel Wilson at 12:00 AM