THE PULP CALENDAR: May 6 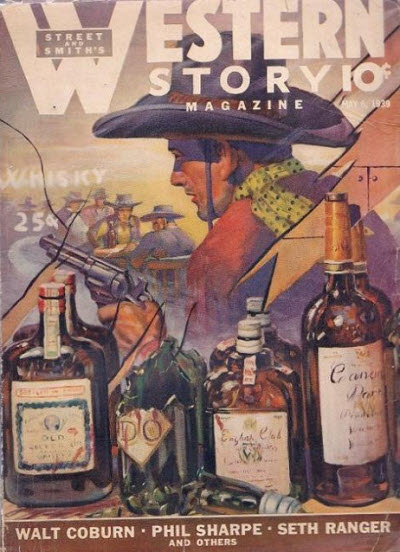 In 1939 the editors at Street & Smith seem to have challenged their cover artists to come up with as many unorthodox camera angles as possible. In this Richard Case cover for Western Story we're looking into a broken mirror behind a bar at a gun dummy turning on whoever fired the shot that broke the mirror. Again, I don't think this illustrates anything inside; someone just thought it made a cool image. There's interesting billing on the bottom of the cover. Walt Coburn and Seth Ranger (aka Frank Richardson Pierce, who also has a serial running this week) are known quantities, but Phil Sharpe was only the magazine's "Guns and Gunners" columnist. That doesn't say much for the other fiction writers this number, who happen to be Anson Hard and B. Bristow Green, both veteran writers but clearly not names that promoted a magazine. If Sharpe outranked them I guess it tells us that western pulp fans -- believe it or not! -- loved their guns. S. Omar Barker has one of his quaint poems here too, if those impress you.
Posted by Samuel Wilson at 12:00 AM