THE PULP CALENDAR: May 27 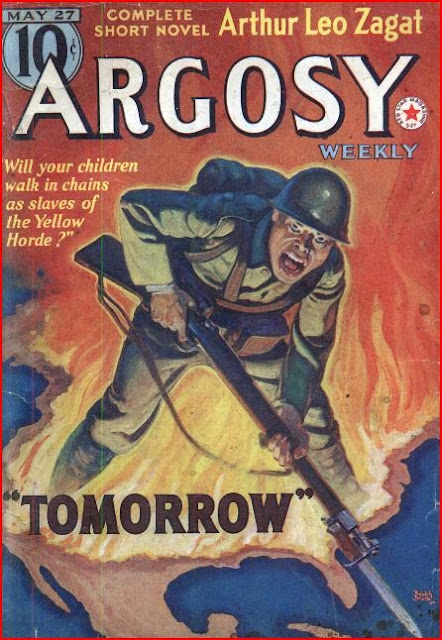 There may be no more terrifying representation of the Yellow Peril than Rudolph Belarski's 1939 Argosy cover launching Arthur Leo Zagat's dystopian "Tomorrow" series. Here is no robed and long-nailed mandarin, nor a shuffling hatchet man of Chinatown -- the normal stuff of pulp iconography -- but a modern solider, one representing multitudes. Such a figure may still haunt some American imaginations today, but he is probably Chinese rather than presumptively Japanese, as in 1939, and better armed still. Zagat's premise is that an "Asafric" coalition of nonwhites could overwhelm and enslave the United States, yet a relative handful of white kids, largely self-raised in lucky isolation in a healthy outdoor environment, could then tip the balance against occupation and in favor of resistance. In effect, Dikar and the Bunch are a little village of Tarzans, and pulpdom knew that no one was either more noble and more savage, in all the good ways, than a white savage, even when they talk and often act like overgrown children. It's a rather embarrassing fantasy, and from our vantage point it can't help but seem wrong, for all that Japan was a legitimate threat to world order in 1939, to imagine the sort of race war Zagat does when Hitler was right there in front of everybody. It's hard not to infer that Zagat saw the Yellow Peril as more menacing than the Aryan Peril, though I don't wish to suggest that he minimized or ignored the Nazi threat. It may just have been that if you really want to write about white savages, giving them white enemies somehow isn't making the most of the premise. In any event, I had more to say about "Tomorrow" and the other contents of this issue two years ago, when I only gave myself one pulp a week to write on an experimental basis on my movie blog, Mondo 70. So follow this link to read more about it.
Posted by Samuel Wilson at 12:00 AM