THE PULP CALENDAR: May 13 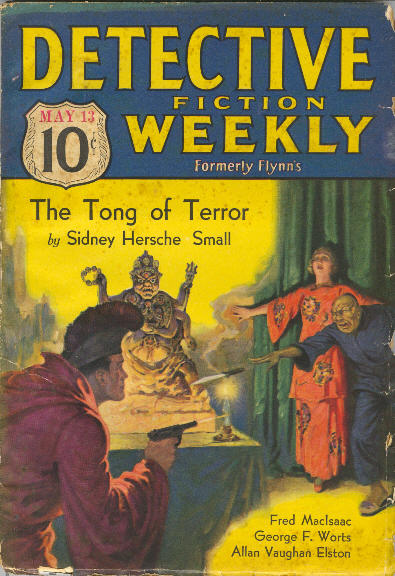 Never bring a knife to a gun fight. The Oriental gentleman on the cover of this 1933 Detective Fiction Weekly apparently never heard that advice. "The Tong of Terror" is probably as generic a title you could choose for a Chinatown story, but Sidney Herschel Small, whose name is prominently misspelled, probably makes his latest Jimmy Wentworth story more entertaining than something in this genre should be today. Along with Small there's a typical DFW lineup this week: Fred MacIsaac, George F. Worts, Allan Vaughan Elston and Ray Cummings, among others. I was curious about Milo Ray Phelps, who wrote comic stories about a bumbling safecracker named Fluffy McGoff from 1931 until his death in 1937. It seems he was a poet on the side and had a couple of lyrics published in The New Yorker. And once upon a time, in 1922, he won a contest put on by the Dodd, Mead publishing company for the best jingle advertising George Barr McCutcheon's latest novel, Yollop. Here it is:


A story both timely and touchin'
Is 'Yollp,' by Mr. McCutcheon;
With its ludicrous theme
It unveils with a scream
A new 'bar' in George's escutcheon.

How do you compete with that?
Posted by Samuel Wilson at 12:00 AM