THE PULP CALENDAR: May 18 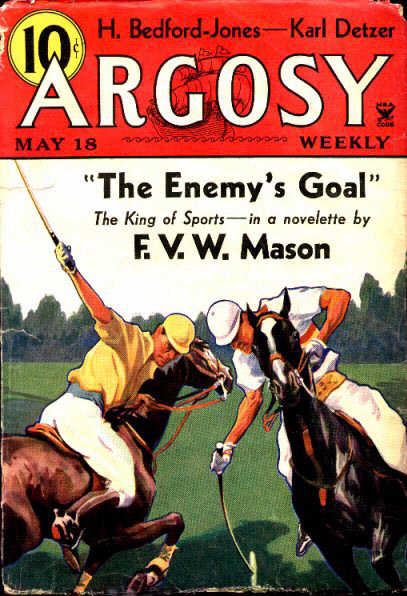 Polo? Somehow I have a hard time imagining the pulp audience as polo fans, much less players. In 1935, however, there was at least one person, Tommy Hitchcock, who was a nationally-known celebrity by virtue of playing polo, and I suppose the sport had the same sort of aspirational cachet for ambitious youngsters that football did when it was dominated by the Ivy League. In any event, the folks at Argosy clearly thought that a polo cover and lead story (by F.V.W. Mason) would sell. Mason's a good writer but any sort of sports story is a tough sell today, however people felt about them eighty years ago. More promising is a novelette by Karl Detzer, who was surprisingly good in the perhaps unpromising genre of fireman stories. H. Bedford-Jones continues his series about his spy, The Sphinx, while George F. Worts wraps up a Gillian Hazeltine legal-thriller serial and Theodore Roscoe continues his War Declared. Paul Annixter and William Merriam Rouse contribute short stories. The polo thing makes this possibly the least inviting Argosy of 1935, which is still my favorite year for the venerable weekly. Even this issue is probably pretty good if we give Mason a chance.
Posted by Samuel Wilson at 12:00 AM