THE PULP CALENDAR: May 7 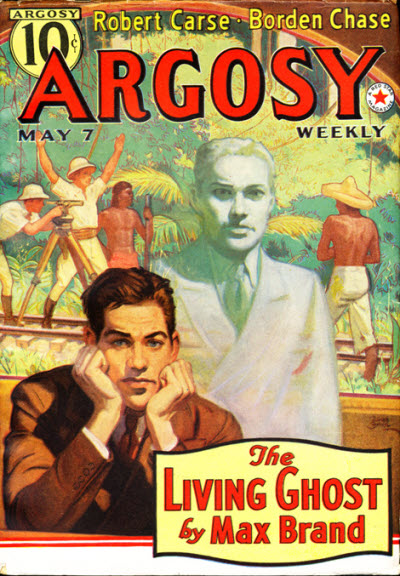 Every so often the Argosy cover editor made a boo-boo. This 1938 issue looks promising from the cover, since you're promised the start of a Max Brand serial as well as stories by Robert Carse and Borden Chase. Well, scratch Carse. According to the Fiction Mags Index, he actually made no contribution to this issue. For Carse substitue Frank Richardson Pierce, with the novelette "Highpockets," Captain Dingle, with the short story "The Smoking Monkey," along with Paul Annixter, Walter Ripperger (continuing the serial This Doll Must Die) and Samuel Taylor. As for Max Brand, I don't know what he was up to with The Living Ghost. I found no evidence that the serial was ever reprinted in book form. I did find out that when Frederick Faust's heirs renewed the copyright on the serial, it was listed -- by mistake or by way of correction -- as The Living God. That mystery aside, this issue isn't all it could be in Carse's absence, but Brand, Chase and Pierce are a pretty good threesome, too.
Posted by Samuel Wilson at 12:00 AM