THE PULP CALENDAR: May 23 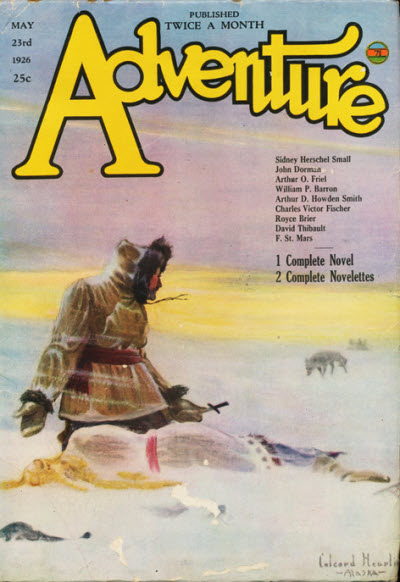 After reducing its schedule from thrice monthly to twice monthly in April 1926 Adventure went out with publication dates of the 8th and 23rd of the month until it resumed the more typical 1st-and-15th schedule with the new year. The presumptive highlights for May 23 are Sidney Herschel Small's lead novella, the 61 page "The Sun Crows," and Arthur D. Howden-Smith's continuing serial A Manifest Destiny. Small specialized in solid East-West stories, set both in the Orient and in American Chinatowns, and I presume -- knowing there are people to correct me if I'm wrong -- that his lead story this issue is in that general vein. Arthur O. Friel is also on board, but only with a short story, the second of apparently three he wrote in a nine-month period about a character named Job Briggs. The short stories are by F. St. Mars, Charles Victor Fischer, John Dorman, future Pulitzer Prize winner Royce Brier and David Thibault. The other long story this issue is "The Pearls of La Paz" by William P. Barron. This may have been a story in a series about the ship Maggie May and its crew that Barron had begun back in 1923. Barron didn't publish much in the pulps, placing only one story after 1930. He published plenty elsewhere, at least in the early 1920s, as attested in Writer's Monthly, the organ of the Home Correspondence School, where Barron apparently learned his trade. One Writer's Monthly item from 1922 mentioned that Barron had published several stories in the Chicago Ledger, a weekly story paper. As it happens, the Falvey Library of Villanova University has digitized many issues of this potentially very interesting publication. You can find out more at Villanova's digital library. I know I plan to give this trove a closer look sometime.
Posted by Samuel Wilson at 12:00 AM