THE PULP CALENDAR: May 21 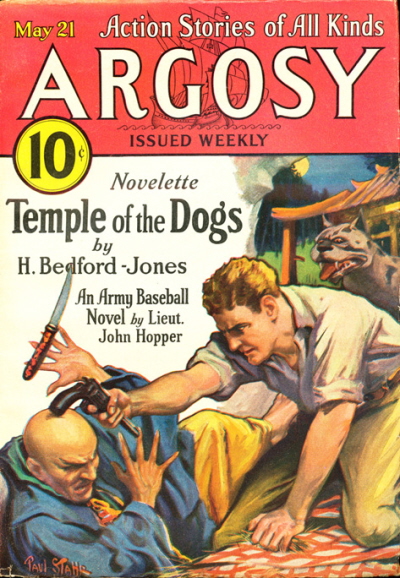 The yellow peril appears to be in peril itself in Paul Stahr's cover for this 1932 Argosy, illustrating an H. Bedford-Jones story. Meanwhile, there are sports stories, and then there are army sports stories, a subgenre Lt. John Hopper may well have had to himself. To illustrate the whims of posterity, Hopper is pretty much forgotten today, while Theodore Roscoe, whose novelette Ten Minutes After Two goes unmentioned on the cover, has been brought back into print in the 21st century, and has had a biography published, by specialty house Altus Press. Hopper's two-parter is joined by serials from Robert Ormond Case (also profiled in "Men Who Make the Argosy"), Frank Richardson Pierce and Fred MacIsaac. A special guest star this issue, and for much of 1932, is journalist Lowell Thomas, one of the early publicists for Lawrence of Arabia and the voice of Movietone News, who contributed a series of fact-based stories to the venerable weekly. I don't know how well he went over since I haven't read many "Argonotes" from that year, but as a rule Argosy readers resented nonfiction comment in their pulps. Little did they know that within a generation a hankering for "true" stories would hasten the pulps' demise.
Posted by Samuel Wilson at 12:00 AM