THE PULP CALENDAR: May 12 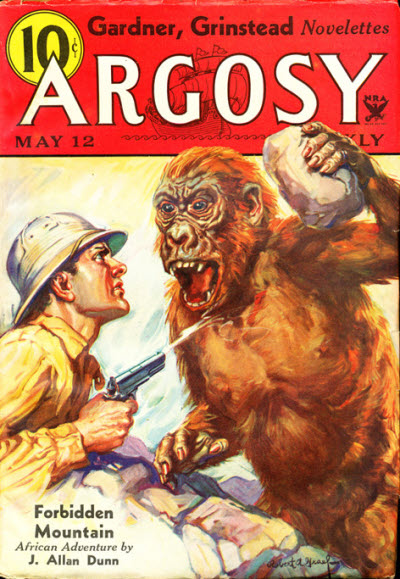 It's too bad that we don't know much about the 1934 Argosy issue behind this wacky Robert A. Graef cover. The Fiction Mags Index doesn't have a table of contents, so we have to infer the serials from surrounding issue and rely on sellers for more information. The battle of the primates, of course, illustrates the cover story, the debut installment of J. Allen Dunn's three-part Forbidden Mountain. The other serials are Fred MacIsaac's Devil and the Deep (conclusion) and Evan "Frederick Faust again" Evans' Montana Rides Again (part three). The Grinstead on the cover is most likely J. E. Grinstead, a western specialist, while "Gardner" is almost certainly Erle Stanley, and Heartwood Auctions identifies his novelette as "Proofs of Death." Heartwood also lists Richard Howells Watkins and Eustace L. Adams among the contributors. The Adams story could be one of his badass adventures or one of his goofy comedies about Fish the drunken test pilot. I'm less willing to guess about the Watkins, though I suppose sports is more likely than anything else. It'd be great is someone who owns this issue can give us more info, but since this is a 1934 Argosy maybe I'll do it eventually.
Posted by Samuel Wilson at 12:00 AM