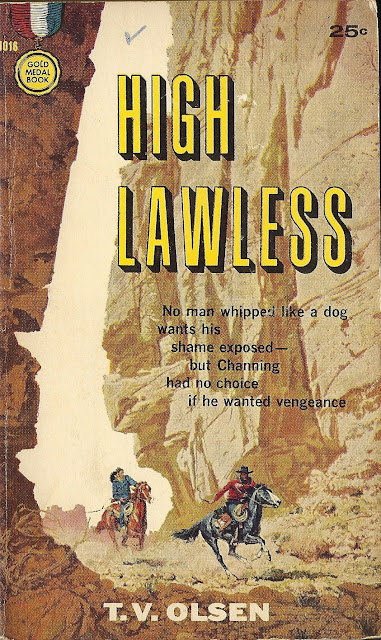 Theodore V. Olsen (1932-93) broke into pulps at the tail end of the era. He began publishing in the most tenacious of all pulps, the Thrilling group's Ranch Romances, in 1956, when the magazine was still coming out every other week. He published fifteen short stories there in a two-year period and had another in the final issue of Thrilling's mightly monthly, Texas Rangers, in 1958. The future was in novels. Olsen had published his first in 1956. Now he got busy and published another in 1959. Beginning the following year he had a good run of novels under the beloved Fawcett Gold Medal imprint. High Lawless is the second of Olsen's Gold Medals. 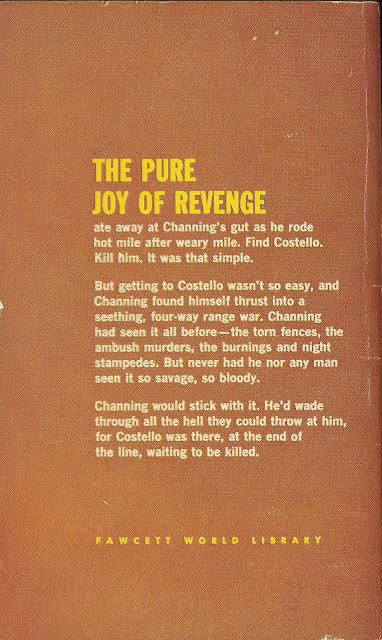 Costello, a gambler, killed our hero Channing's protege, a young man who couldn't lay off the cards. The gambler proves to be a kind of human Macguffin, disappearing for most of the novel once he takes refuge at the Anchor ranch, owned by Costello's uncle, Santee Dyker, once a gambler himself but a far more formidable figure than his cowardly nephew. Anchor's ramrod Streak Duryea is the man who whipped Channing like a dog to make him lay off Costello, but that only prods our hero to see revenge against the entire Anchor ranch. The easy way to do this is to side with Anchor's rivals in an impending range feud. The boss of the rival range was murdered recently -- by Streak, we learn -- and the land falls to an unlikely heiress, a young Swedish woman who had done a lonely old man a rare kindness. She has the bankroll to secure an important lease of land and finance a big cattle purchase, and the main action of the novel is the cattle drive, menaced constantly by an Anchor goon squad. Inevitably, and in spite of the lady's squeamishness, she and Channing fall in love. As inevitably, the novel's climax finds her in personal peril as Dyker reverts to the strongarm tactics he'd tried on an old mountain man earlier, only to be thwarted by Channing.

Olsen is best known for his two novels that were turned into films, The Stalking Moon and Arrow in the Sun, the latter filmed as Soldier Blue. High Lawless is a journeyman work in which Olsen seems to struggle with the longer format, even at 138 pages. Its main problem is a lack of focus in the conflict. You don't expect Costello to be eclipsed so totally as an antagonist by Dyker and Streak, and when he reappears toward the end it's as an implausible plot device, a loser given the essential task of executing a captive Channing by an overconfident Dyker, even though the reader can see Costello screwing up from miles away. Olsen hints at hidden depths to Streak's characters, showing him initially as an honorable antagonist reluctant to flog Channing, but once he's established as a murderer he's a pure villain. And as if these three villains weren't too much, Anchor brings in a hillbilly gunfighter to kill Channing, without giving the man any information to prevent him from being utterly outwitted by our hero. Channing's increasingly amorphous revenge agenda isn't enough to really individualize him compared to the more alienated or psychologically rich characters in other paperback westerns. That weakness aside, High Lawless is a decent action western with plenty of fighting and one very good set piece in which the bad guys try to stampede the good guys' cattle with nighttime pyrotechnics. The novel is disappointing in some ways but not so much that you wouldn't give Olsen another chance, especially if you can assume that the later novels will be better.