THE PULP CALENDAR: May 31 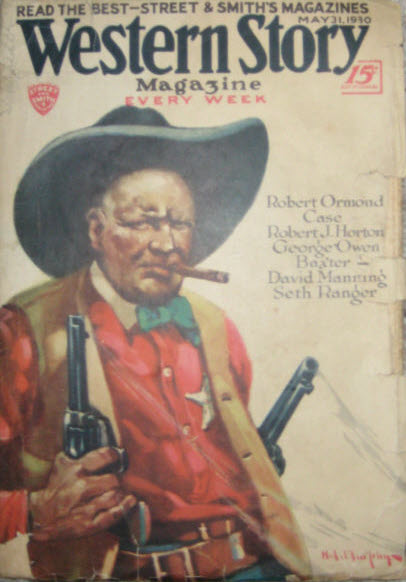 When I did a Google image search for Western Story for May 31, 1930, the results included a bunch of pictures of Clint Eastwood, who was born on that day and turns 86 years old today. All the more reason to do a western pulp, though this one looks a little odd to me. Is it just me, or does this cowboy look like Winston Churchill on a dude ranch? Maybe the cigar does that to me. As for who's really in this issue, Robert Ormond Case and Robert J. Horton are the headliners with a novelette and serial, respectively, but they get top billing only because Frank Richardson Pierce preferred to appear under his Seth Ranger pseudonym, while Frederick Faust uses two different aliases, George Owen Baxter and David Manning, but not his best known, Max Brand. Perhaps the most interesting contributor this week is Rogers Terrill, who places a story here not too long before he became one of Western Story's main competitors as the editor of Popular Publications' western pulps. In that role, he's often given credit for elevating the western genre above the standard set by Western Story and inferior "gun dummy" pulps, so I'd be interested in seeing whether Terrill practiced what he preached.
Posted by Samuel Wilson at 12:00 AM