THE PULP CALENDAR: May 26 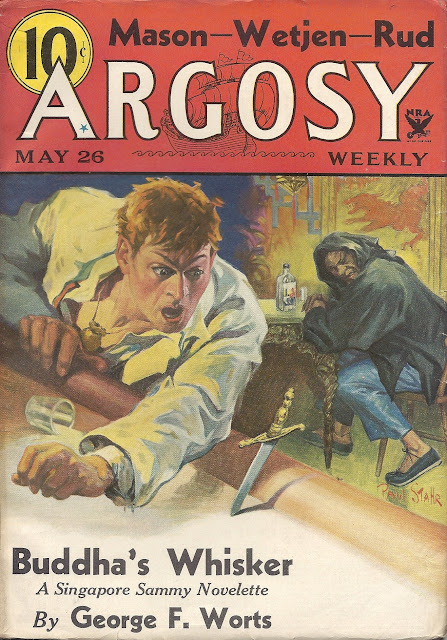 The main attraction of this 1934 Argosy for me is right on the cover. "Buddha's Whisker" is a fun standalone Singapore Sammy story by George F. Worts. Sammy Shea is always on the trail of his deadbeat crook of a dad or else raising money to continue the hunt, and in this novelette he and sidekick of the moment Lucifer "Lucky" Jones get drawn into a plot to steal a sacred relic that ends with Sammy thisclose to finally catching up with his punk parent. While Worts's Peter the Brazen stories, written under the name of Loring Brent, feature a stalwart, upright hero, the Sammy stories are charmingly disreputable in the almost amoral manner of South Seas or Asian adventure. "Whisker" is the last Sammy novelette; Worts would bring the character back in three serials over the next two years, including the 1935 three-parter Shark Bait that will be showcased on this blog.

There are no new serials this week as the issue concludes J. Allen Dunn's Forbidden Mountain while continuing F. V. W. Mason's The Barbarian and Frederick "Evan Evans" Faust's Montana Rides Again. Anthony M. Rud contributes the novelette "The Marked Deuce" set in South America, while Theodore Goodridge Roberts writes a short story, "The Hero," about an unlikely hero who inspires a ship's stand against an infamous pirate and his ship.Albert Richard Wetjen usually wrote stories of men at sea but with "Hammerhead" he tries his hand at animals at sea and comes up with something reasonably entertaining for the genre. The serials are as entertaining as fragments can be but "Buddha's Whisker" and the Wetjen story really make this issue worthwhile. I like The Barbarian enough that I'm gradually piecing it together. I have the next chapter, for instance, but the main attraction of the June 2, 1934 Argosy, as you'll see a week from now, is another Bellow Bill Williams story by Ralph R. Perry. Don't miss it.

The May 26 Argosy is sponsored by: 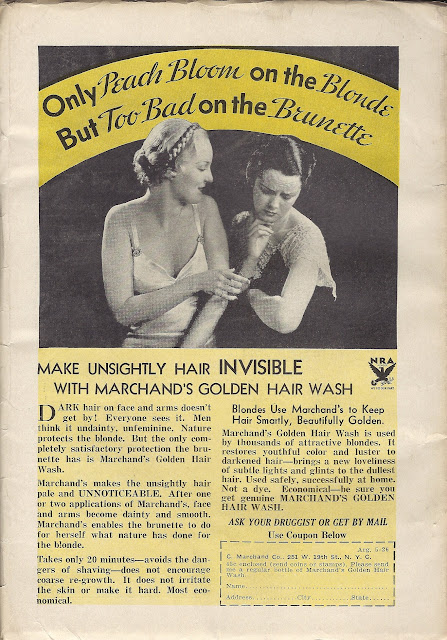