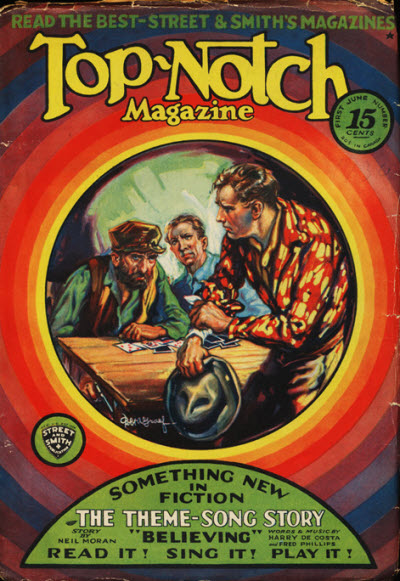 Top-Notch was one of several twice-monthly general-fiction pulps published by Street & Smith, along with The Popular and Complete Stories. It's probably best know today for publishing some of Robert E. Howard's stories about the 20th century adventurer El Borak. Back in 1930, this issue saw a change in Top-Notch's cover format, introducing a more vivid color palette and an almost Art Deco design concept. The same issue also launched a strange story gimmick: the "theme-song story." Basically, the entertainment industry had recently discovered that talking, singing pictures with theme songs led to big sales for records and sheet music. Street & Smith's idea was to commission theme songs for the lead stories in each issue of Top-Notch, and I presume each issue also included sheet music for these songs. The gimmick lasted until at least November of that year. As for the prose writers for this issue, I recognized only one: the legendary Burt L. Standish, aka William George Patten, whose legendary creation, once a household name, was Frank Merriwell, the archetypal American student-athlete. Patten/Standish created Merriwell back in 1896, and eventually Street & Smith published the adventures of a second-generation Merriwell. The serial concluding in this issue, Flaming Hate, was a change of pace, in that previous stories usually had Merriwell's name in the title. It may have been meant as a last-chance game-changer, but it seems not to have worked. The next Merriwell serial, The Red Arrow (July-August 1930) is Merriwell's last appearance in pulp, according to the Fiction Mags Index, though the character would continue in comic strips, a movie serial, and radio shows. Top-Notch went monthly in late 1932 and expired in the fall of 1937.
Posted by Samuel Wilson at 12:00 AM