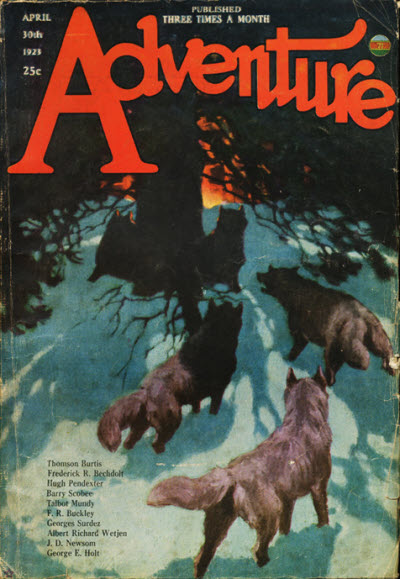 The 30th brings us back to Adventure in its thrice-a-month glory days. This 1923 issue has a nice, almost eerie cover by A. L. Ripley and at least four major pulp authors, at least by my standards. Talbot Mundy wraps up his Jimgrim serial The Nine Unknown this issue. I'm in the middle of a Jimgrim story right now and I really like the early tales set in Palestine under the British Mandate. I understand that the series gets more exotic and philosophical later but I'm willing to take a chance on where it goes. There are also standalone stories (some of these may be novelettes) by two masters of imperialist adventure, J.D. Newsom and Georges Surdez, and sea-story stalwart Albert Richard Wetjen. Beyond these big four, there are authors that more veteran Adventure fans won't sneer at like F. R. Buckley, Thomson Burtis, George E. Holt, Barry Scobee and Hugh Pendexter, who has the issue's other serial. Frederick R. Bechdolt gets a mention on the cover for a nonfiction piece about Butch Cassidy. Just from the names this looks like an above-average issue of an above-average magazine.
Posted by Samuel Wilson at 12:00 AM