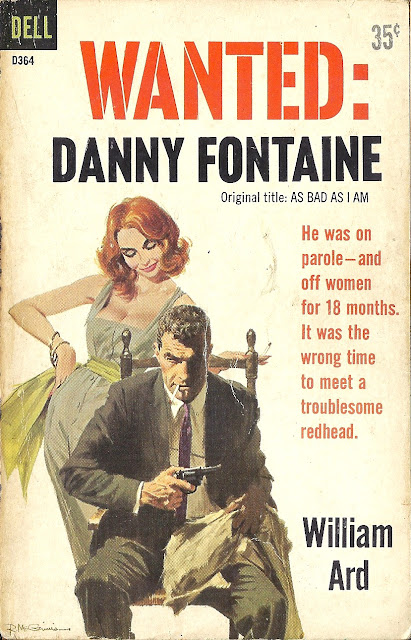 William Ard never published in the pulps but went straight to paperback original novels, becoming a prolific author under numerous names before his untimely death from cancer at age 37 in 1960. As Jonas Ward, he wrote the Buchanan novels that inspired the 1958 Randolph Scott-Budd Boetticher film Buchanan Rides Alone. Ard published this novel in hardcover in 1959 as As Bad As I Am. That title is taken from some jailhouse graffiti recited by the protagonist, ex-con and ex-actor Danny Fontaine:

With the publication of When She Was Bad in 1960 As Bad As I Am became the first of what proved a tragically short-lived series. Dell clearly hoped to market them as the Danny Fontaine novels, no matter what title Ard preferred. This 1960 re-release also required a slight rewrite, since Ard had changed his hero's first name from Mike to Danny from one novel to the next. Wanted: Danny Fontaine is the first Ard novel I've read. It might be described as a hard-boiled fairy tale, often grittily realistic in its depictions of crime and police procedure, and often too romantic to be true. 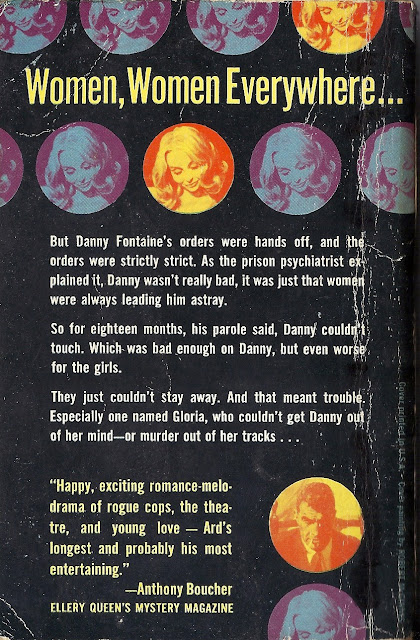 Fontaine is a three-time loser who got in trouble each time out of a compulsive desire to help a pretty girl. His parole board's perverse plan to reform him is to forbid him from dating women for eighteen months. Danny's determined to tough it out while living off rent on the apartment building he owns with his sister in a rapidly de-gentrifying neighborhood. In a familiar pop trope, his sister is married to a tough cop who distrusts Danny. But in this story the cop's the man you can't trust.

Even though Danny assumes he can't get work as an actor because of his criminal record, he's drawn back into the thespian milieu, impressing the casting director of a soap opera with his reading of audition lines describing prison life. He meets cute with Gloria Allen, a showgirl on the verge of a big break on a TV variety special starring a thinly-disguised satire of Jackie Gleason. Gloria gets a parallel storyline showing the pitfalls of her possible rise to stardom, including a date arranged by the crypto-Gleason's agent with a young lawyer negotiating the comic's new contract -- a date the lawyer expects to come with a bonus at the end. One of the novel's too-good-to-be-true elements is its revelation of the lawyer as a true gentleman at heart and a good guy who wants to do Gloria a good turn by helping Danny in his hour of crisis.

The crisis comes when Danny learns that his cop brother-in-law has set up two prostitutes in the apartment building, taking a cut of their earnings as protection money. A showdown leads to a struggle for the cop's gun in the marijuana-scented apartment that ends with the cop shooting himself by accident. Convinced that there's no way he could make the dead man's brother officers believe the truth, Danny runs, eventually taking shelter in Gloria's apartment.

It seems that everyone but the police is willing to believe Danny's story. Ard does nothing in this novel to flatter cops, who are shown, especially in the upper ranks, to be willing to lie and cheat to get high-profile convictions under unceasing pressure from their superiors. One police captain in the particular gets the truth of the incident from the prostitutes (some readers will object to their blatant Puerto Rican ethnicity), but ruthlessly convinces them to change their story to one portraying Danny as the aggressor. As the manhunt for Fontaine becomes front-page news, Gloria's future in entertainment seems to disintegrate once the comic's entourage learns of her relationship with the fugitive, but the smitten Gloria couldn't care less. Despite the lawyer's game best effort, Danny feels compelled to run again, only to be shot and caught. This is his moment of maximum peril as Ard sells the threat of torture or worse at the hands of the police. Fortunately, private detective Barney Glines -- a name Ard had used before, though he's supposedly not the same character from earlier novels -- to help the lawyer outmaneuver the police and track down the one man whose eyewitness testimony can counter the prostitutes' perjury. It all comes to a melodramatic courtroom climax, punctuated by the guilty police captain blowing his brains out. All ends happily, and in When She Was Bad Fontaine will become Glines' protege.

Somehow, over 219 paperback pages (in a sturdy edition perfectly shaped for reading) Ard maintains a tricky balancing act between noir and urban fable. When the novel goes hard-boiled, it's utterly convincing, and when it waxes romantic it has you enough on the side of his hero and heroine that you forgive the virtual whimsy of it. In the end I guess it's less a mix of styles than Ard doing his own thing in a unique and unflaggingly entertaining way. It's sad to realize that a year after As Bad As I Am came out in its original form, Ard was dead. There remains plenty for me to discover -- I especially want to try a Buchanan now -- but who knows how good he would have gotten in the long run?
Posted by Samuel Wilson at 7:04 PM