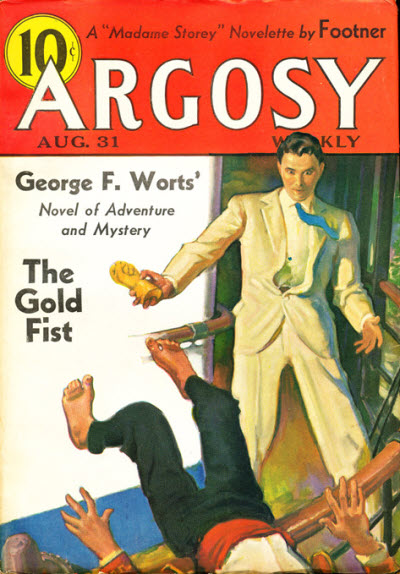 Now that he had retired his alter ego Loring Brent and Brent's great creation Peter the Brazen, George F. Worts had more time  The Gold Fist, premiering in this 1935 issue, was a rare Worts story that had nothing to do with either Singapore Sammy or defense attorney Gillian Hazeltine. It starts with a corny melodramatic premise that actually might have made a screwball comedy. Bill Lassiter, a playboy heir to a $13,000,000 fortune, makes a bet with his father's secretary, who's inherited a couple of million herself, that he can earn $50,000 in a year solely with his brains or hands. If he can't, the secretary gets all his millions. After establishing the premise, Worts fast-forwards to the twelfth month, which finds Lassiter hard up in Peru after getting conned out of a commission that would have won him the bet. He then just happens to see a Chinese woman murdered by a man without a nose. The murderer was after a package, and when the victim drops the package Bill sees what looks like a sculpted gold fist. He subsequently learns that this is no mere gold fist but the Gold Fist, a much-coveted Inca artifact that may convey long-forgotten engineering secrets of the great empire. Assured that he can get at least $100,000 for this treasure, Bill tracks down the noseless man and steals the Gold Fist. After sending him over the side of a steamer (see cover), Bill determines that the sculpture is "the fist of a wise man, clenched not in rage to strike but in determination to hold a secret." Lassiter now has to find a purchaser in New York to just make his deadline and win his bet. His quest is complicated by the lurking threat of a  Bolivian conspirator, as well as his relationship with Joanna, an American woman he met and helped in Peru, whom he learns was held prisoner as an insane person on the steamer he sailed home on, only to be set free abruptly in New York.  And just for the hell of it, back in New York his scientist cousin Homer has developed the ability to see when people are about to die. Parts One through Three of Four of this serial are available in three consecutive issues of Argosy at unz.org. Whether you'll really want to see the conclusion is another story.

In other serial action, Max Brand continues The Sacred Valley, Borden Chase concludes Bed Rock (it's about sandhogs, not cavemen), and Frank Richardson Pierce resumes the three-part Silver Thaw. This entertaining tale of a father-son logging feud inspired a spin-off series about a supporting character, the belligerent CCC worker Donnybrook McDuff. This consisted of at least one novelet and one serial, Donnybrook Shoots the Works, in 1936. The main standalone story this issue is a Hulbert Footner novelette featuring one of pulp's great female sleuths, Mme. Rosika Storey. In "The Richest Widow" the detective and her assistant Bella must figure out who made the title character and her new husband, an English actor, go out the porthole of the widow's ocean-liner stateroom. There are a lot of suspects, to be sure, since the widow was going to rewrite her will. Whodunit? Find out for yourself here. Shorts by Theodore Fredenburgh and Franklin H. Martin round out another solid -- if also goofy, in Worts' case -- 1935 Argosy.
Posted by Samuel Wilson at 3:58 PM