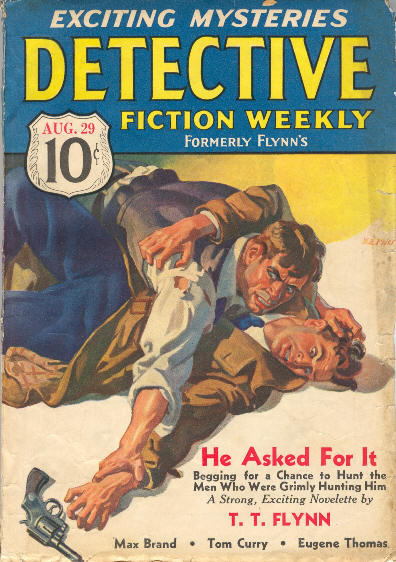 This 1936 Detective Fiction Weekly has a strong-looking lineup with an emphasis on the feminine. It features two female series characters, Whitman Chambers' Katie "The Duchess" Blayne" and Eugene Thomas' antiheroine Vivian "The Lady From Hell" Legrand. Those are women written by men, but before we move on I always have to pause when confronted with a set of initials and no biographical info. So who was M.I.H. Rogers, anyway? Rogers published most of the time in Street & Smith's detective pulps, this issue's "The Push-Over" being the author's first appearance (of two) in DFW. More familiar to DFW readers was T. T. Flynn, whose cover story apparently had nothing to do with his common protagonists, Mike and Trixie. Tom Curry was trying to launch a series about a secret agent named George Devrite. He'd introduced the character just last week and would publish the third Devrite story in as many weeks next issue before a hiatus until November. There are also short stories by Norman Daniels and Anthony Rud, while Max Brand concludes his serial The Granduca -- which premiered with a cover image of a woman wielding a gun back on July 25. Two cheers, at least, for female empowerment this issue, and who knows how many more are in order?
Posted by Samuel Wilson at 3:15 PM