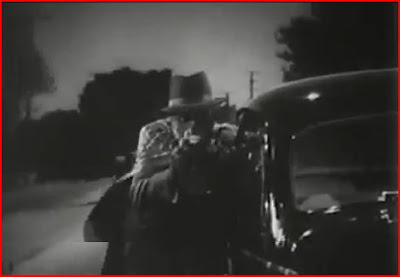 The Octopus's gangsters (led by Marc Lawrence) already think they've killed criminologist and amateur magician Richard Wentworth and are trying to take out The Spider with a falling spotlight as this chapter opens. Of course, Wentworth's (and The Spider's) lovely assistant Nita Van Sloan gives a timely scream to signal that The Spider should step out of the falling object's way. The thwarted gangsters make a fighting retreat, convinced that they were at least half successful until they see Wentworth walk out of the bus station turned theater. As Nita had explained earlier to the benefit organizers, the gangsters had shot at a projected image of Wentworth, apparently lacking any depth perception to help them detect the trick. To account for his absence during the mayhem, Wentworth claims that the gangsters had knocked him out and left him in his dressing room. No one finds this odd, considering that the gangsters had tried to kill him earlier. But never mind. My favorite thing about this whole scene is how baffled the organizers are by Nita's explanation of the projection trick. Should I explain in more detail how it worked? she asks. Cut to The Spider skulking outside. Back to Nita: "Now do you understand?" They may not, but they're not going to admit it.

The Octopus is strangely forgiving of this latest failure, given how casually he's killed failures earlier. A great general takes minor setbacks into account, he says before moving on to his next project: payroll robberies. Again in a peculiarly chipper mood, he promises big bonuses should the caper succeed. He has reason to be confident this time since he's got an inside man -- a woman, actually, -- at the bank. This receptionist can tap into executive calls to find out when money is arriving or departing. She then passes notes to The Octopus's man. Meanwhile, Wentworth has had the benefit tickets purchased by the gangsters checked for prints. One set matches a police file that gives Wentworth a name to work with. As Blinky McQuade, he finds this man to give him a tip that the police are going to tap his phones. Wentworth expects him to call his boss right away to stop all calls to this phone, and he's planted his minion Jackson in the place as a drunk to get the number. We've already seen Jackson display a now-obsolete talent for listening as someone dials a number on a rotary phone. He can identify each digit in the number by the time it takes the rotary dial to circle back into place. Once the crook finishes dialing, Jackson attacks him and knocks him out. Blinky reappears, now speaking with Wentworth's voice, to call the cops for a trace on the number, which turns out to be the Commerce Bank where that receptionist works. 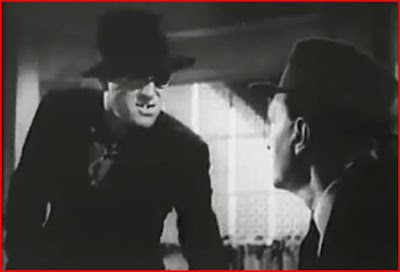 We've already met the receptionist. During the chase as the gangsters fled the bus station, their car clipped a newsboy and knocked him down in the middle of the street. Wentworth stops his car to help the lad, and the boy's older sister ends up being the crooked receptionist. After snooping on her method for relaying info to the Octopus, Wentworth and Nita snatch her off the street, Wentworth using the same finger-in-the-back technique that Blinky used on a cop a few chapters ago. 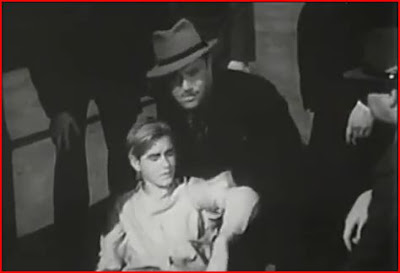 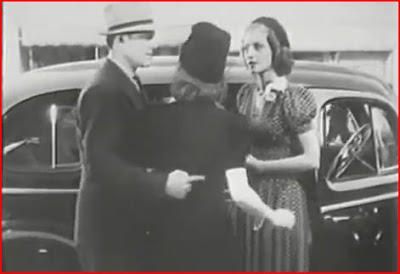 When Wentworth threatens the third degree, the receptionist faints. Since fainting is a girly thing, Richard asks Nita to verify that the girl isn't shamming. No she isn't, it turns out; the poor thing is scared to death and Wentworth didn't even have to put on his Spider outfit. Needless to say, the receptionist is a good girl at heart who was embroiled in a wiretapping scheme some time ago that left her subject to a gangster's blackmail. It looks like she and her Wentworth-idolizing brother are going to stick around as supporting players for a while, whether we like it or not. 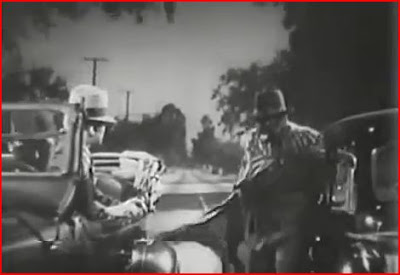 Meanwhile, The Octopus's men pull off the robbery but the gangster who'd been blackmailing the receptionist is killed in a shootout. That hard-luck newsboy is practically trampled by a fleeing gunman, but recognizes the man as a nearby garage worker. Wentworth is exultant at an apparent big break and gathers Jackson and Ram Singh for a stakeout of the garage. They find some gangsters driving away, apparently to deliver the bank loot someplace. The good guys follow but are eventually made by the suspicious gangsters, who start firing bullets and lobbing grenades at the pursuing vehicle. Wentworth changes to The Spider and prepares for a car-to-car attack. There's one long shot shot of the car stunt shot on location, but most of the action in both cars is done with process shots. The gangster car goes out of control once The Spider jumps on board and crashes into an electrified power-plant fence for our cliffhanger. This episode again shows the above-average competence of the Octopus gang, since they score another win with the bank robbery, and despite plenty of action the focus this time is more on detective work. The episode is slowed a bit by the need to introduce two possibly major new characters but it's still pretty good. If you're really worried about The Spider's fate, we'll have the answer for you sometime next week.
Posted by Samuel Wilson at 5:00 PM