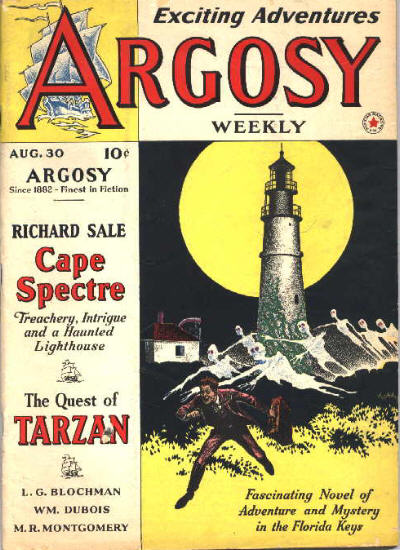 When last we left Tarzan, the ape man was trapped in a floundering pulp weekly. Technically speaking, he's a captive on board an old wooden cargo ship that's been commandeered by a Nazi, but before long he and several supporting players in The Quest of Tarzan will find themselves stranded by shipwreck on that island Edgar Rice Burroughs mentioned in last week's prologue -- the one settled by refugees from the Mayan Empire. Maybe they're Mayans because Burroughs liked writing Mayan-esque names.But they behave like most primitives who encounter Tarzan, taking him first as a god but later showing skepticism, debating his divinity and his fate in a tongue he hasn't yet figured out. Meanwhile, Burroughs still finds it amusing to torment his stereotyped society dowager, for whom the sinking of the ship and the escape to the island are but the latest indignities she protests pretentiously unless Tarzan gives her a death stare. I guess it was a matter of whatever it took to reach his word count. Here's how Virgil Finlay sees it: 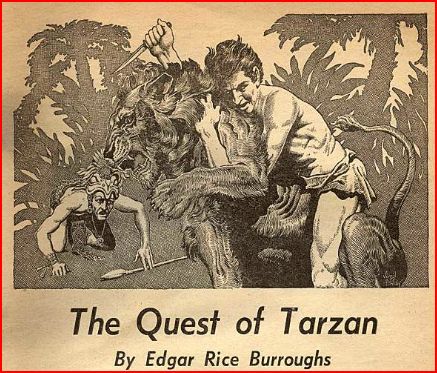 Moving right along, this 1941 Argosy launches another serial, Richard Sale's thriller Cape Spectre. The hero has been sent to take over a spooky accursed lighthouse that can't seem to keep any personnel despite its potential strategic importance. Sale tips us off to the problem: pest control. This first installment closes with our man discovering a rattlesnake in his bed. He finds something else: his predecessor is supposed to be long gone, but evidence indicates that the lighthouse radio was in use just minutes before our hero arrived. Hmmm...

This issue also concludes Murray R. Montgomery's rakehelly serial Swords in Exile, but since I came in too late to really immerse myself in the thing, I let it go with no further comment. As for the rest: 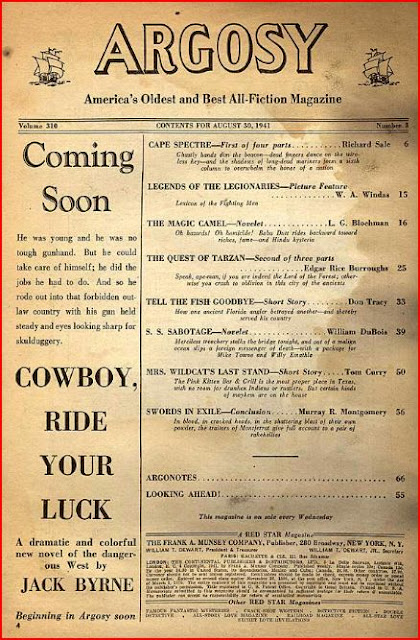 Two latter-day series characters (or sets of characters) take up most of the remaining space. L. G. Blochman's "The Magic Camel" continues the misadventures of Gundranesh Dutt, a "babu" (i.e. a native of India trained for the colonial bureaucracy) who runs the Grand International Detective Bureau in Calcutta with help from his cousin Danilal. Gundranesh weighs in at approximately 300 pounds, while illustrators portray Danilal as a near twin to Mahatma Gandhi. These are comedy stories, most of the comedy supposedly resulting from the funny way the Dutts talk. To be more specific, these are dialect stories in a way that the superficially comparable Charlie Chan novels are not. Chan is challenged by English grammar but clearly has a brilliant mind. Gundranesh Dutt does not. 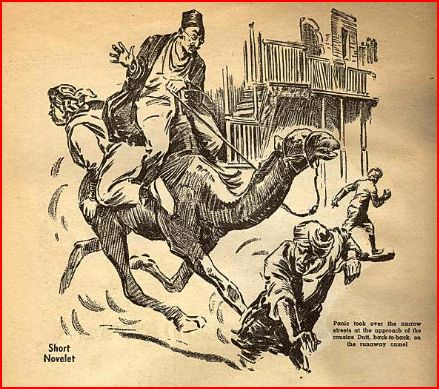 "Cousin Danilal!" the fat babu exclaimed, "You are three days premature in semi-fortnightly visit from Barackpore. Scarcely recognized you in new green turban. You have also altered mustache with upward curls at terminals. Disguise, Cousin Dani?"

Try to deal with that for the length of a Short Novelet. Until recently, if not still, you could still get away with this sort of Indian dialect in comedy: verbose run-on sentences with a noticeable lack of pronouns. You're probably hearing the stock voice in your head. Anyway, as the illustration shows you, this is a slapstick story involving much chasing about on camel, same being pawn in jewel-smuggling operation unknown to Dutt. It's pretty sad stuff, not really funny enough to redeem its racism. 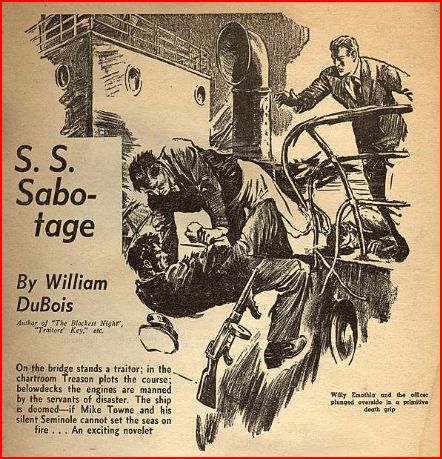 William DuBois' "S.S. Sabotage" also spotlights an ethnic detective of a sort. Willy Emathla, a college-educated Seminole, is part of a three-man team along with his millionaire mentor, "ash-blonde giant" Mike Towne, and Towne's other protege, two-fisted playwright Christopher Ames. The three work together -- Emathla is always deferential, but indispensably supercompetent, especially when violence is called for -- in a series of stories pitting them against the traitorous Paul Derring, described as resembling the actor John Gilbert. Theirs is an action-packed series, but none of the protagonists really has much of a personality. Willy behaves exceptionally here -- he's usually more like a Vulcan -- by applauding the premiere of Ames' latest play with a war whoop --before he prevents Ames' assassination by one of Derring's goons. Our heroes have to stop Derring from seizing a British freighter in the Caribbean without violating U.S. neutrality. Inevitably it loses some of pulp's buccaneering swagger in its sides-taking relevance to the world war, but "S.S. Sabotage" is a good story, particularly by Argosy's 1941 standards.

The rest of it consists of another too-slick story by Don Tracy, who was in last week's issue, and another in T. T. Flynn's comedy-western series about "Mrs. Wildcat," a tough Texas saloonkeeper. "Mrs. Wildcat's Last Stand" also features an educated Indian who actually gets the girl -- a white girl who was his college sweetheart, both being archaeologists -- after being mistaken for a savage kidnapper. Turns out the admirable young man is just trying to help stop his old man from trading invaluable tribal artifacts for firewater.

Next Tuesday we'll wrap up Tarzan, continue Cape Spectre, visit Chinatown and meet men from Mars while Argosy gets an injection of pure pulp from E. Hoffman Price. So long for now from 1941!...

Posted by Samuel Wilson at 1:18 PM