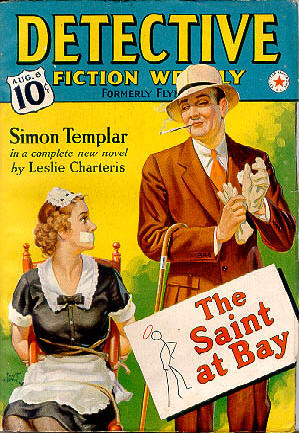 Simon Templar makes his Detective Fiction Weekly debut in this 1938 issue. The great creation of Leslie Charteris first saw print in England a decade earlier and quickly became a mainstay of the British story paper The Thriller. The Saint made his American debut way back in 1930, in Clayton Publications' All Star Detective Stories. He didn't appear in an American pulp again until 1933, when "The Death Penalty" appeared in Star Detective Novels, from the publishers of Short Stories. Starting in 1934 he had a more prestigious perch in The American Magazine, a slick monthly from the publishers of Collier's. In 1937 he began appearing in Munsey pulps, first in the monthly Double Detective, then in DFW. Most of the magazines I've mentioned up to this point made a point of identifying the author on their covers, but not his creation. That DFW ballyhoos the presence of The Saint probably has something to do with the release of the first Saint movie by RKO Pictures a couple of months earlier.Templar would appear twice more in DFW, both times in March 1939, then once in the monthly Flynn's Detective Fiction after Popular Publications took over the title. The Saint eventually had his own digest magazine from 1953 to 1967. Apart from the Charteris story, this issue of DFW is notable for not having a serial running. I guess that makes this the ideal issue to sample, since you don't need any other issue to enjoy it in full. Unfortunately, it doesn't seem to have a top-flight lineup apart from Charteris; the other contributors are Thomas W. Duncan, Baynard Kendrick, Julius Long and Frederic F. Van de Water. I don't know enough about any of them to judge them, but The Saint is great stuff.
Posted by Samuel Wilson at 5:34 PM