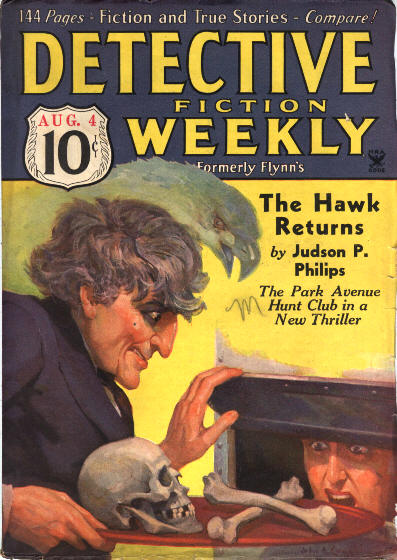 The Hawk was the first foe of Judson P. Philips' Park Avenue Hunt Club of gentleman vigilantes, back in January 1934. It was the start of the Hunt Club's long-running series, but the story was named for the villain. He made enough of an impression for Philips and Detective Fiction Weekly to bring him back that August. Whether he got a third outing I don't know, but the Hunt Club went on for another decade, though Philips slowed down the pace of production in the early 1940s. This issue's place in history has little to do with the Hunt Club or the Hawk, however. If you read the magazine straight through, "The Hawk Returns" is followed by a thirteen-page story called "Death Sits in the Dentist's Chair." This is the pulp debut of the now canonical Cornell Woolrich, who had turned to crime (writing, that is) after fading out as a more mainstream writer in the "flaming youth" genre. He published three more pulp stories over the rest of the year and really got going in 1935. DFW remained his main outlet for the rest of the decade. Along with Woolrich and Philips you get a Max Brand serial and short stories by Charles Alexander, Allan Vaughan Elston, Eugene P. Lyle Jr. and Edward Parrish Ware, but they're probably all afterthoughts for the pulp collector.
Posted by Samuel Wilson at 3:14 PM