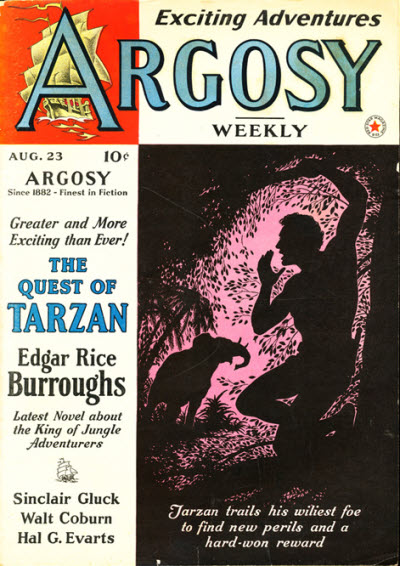 By this time in 1941, Argosy's longtime stablemate Detective Fiction Weekly had ceased to be a weekly in another sign of the dire straits facing the Munsey Corporation. For all I know, by the time this issue hit the newsstands the decision had already been made to end the venerable weekly's weekly status. The proof wouldn't come for another month. For now, Argosy not only soldiered on but played an ace. Edgar Rice Burroughs' Tarzan was born in another Munsey magazine, All-Story, back in 1912. Throughout his career, the ape-man bounced back and forth between the Munsey mags and the McCall company's Blue Book and Red Book, depending on who paid Burroughs more. He had last appeared in Argosy in a 1938 serial. Perhaps now the Munsey people thought Tarzan could save Argosy, at least for a little while. 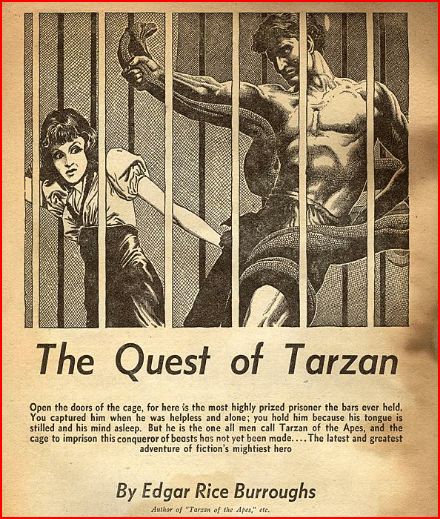 Virgil Finlay had been doing occasional interior illustrations for Argosy since 1939.
This was not one of his finest hours.

The Quest of Tarzan gets off to a dubious start with some anticipatory exposition about Mayans settling islands in the South Pacific before moving on to the negotiations of a German ship owner and an Arab slave trader, the latter promising to provide the former with a wild man to exhibit in circuses. The German is briefly taken aback when told that the wild man is white, but once informed that the wild man is also "English born" the ancestral hatred takes over. For the Arab, apparently an old enemy of Tarzan, this will be sweet revenge. He's somehow learned that Tarzan got bonked on the head or something (in a previous adventure?) and has lost his memory, reverting to his most primitive self. I'd seen the amnesia gimmick done in the 1929 silent serial Tarzan the Tiger; had Burroughs himself done it before? Anyway, he's wandering through the jungle until the slavers capture him and deliver him to the German. Meanwhile, World War II has broken out and another German passenger takes advantage of the fact that the first German was sailing under a British flag to confiscate the vessel in the name of der Fuehrer. Tarzan acquires some cellmates, kills a snake and regains his memory, most likely because Burroughs had tired of the amnesia gimmick already. The ship takes on some British prisoners, including a stereotypical dowdy dowager and her more hip children. This is exactly what you want to do with Tarzan of the Apes: stick him out at sea on a boat. I expect he'll meet some misplaced Mayans before this three-parter is open, but I'm not sure you can take that for granted.

This is another Argosy without a table of contents on the Fiction Mags Index, but since all three issues containing The Quest of Tarzan have been scanned and made available online, I can fill in that gap. 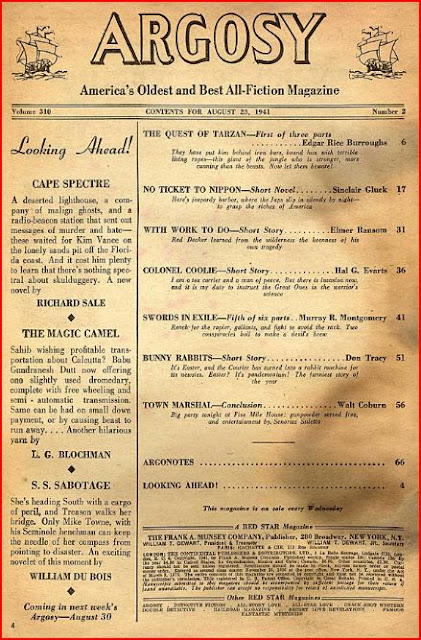 While the Tarzan story features an evil German, Japanophobia prevails in this issue by a 2 to 1 margin. Sinclair Gluck's novelette "No Ticket to Nippon" has American gangsters helping the Japs smuggle a strategically valuable element out of the country. It sports some fragrant Japano-jibberish from the Nipponese villains, e.g. "Ah ha! Big dirty trick on me, please, Captain Coast Guard! I notta knowing thatta stuff! White man fooling Japanese skipper, please. Telling that cement! Ah ha! Dirty work, I think so!" You can easily imagine Jerry Lewis or Mickey Rooney playing the part. The Japanese retain some dignity in Hal G. Evarts' "Colonel Coolie," perhaps because, with the action set in China and his heroes Chinese, Evarts has no excuse to resort to vaudeville pidgin. In the story, a coolie survives torture and saves his unit virtually by accident, succeeding where the stratagems of his westernized, academy-trained commanding officer had failed. 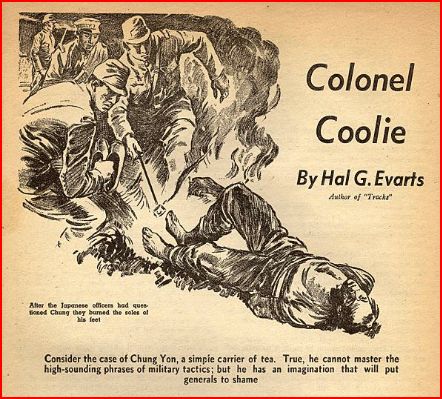 I didn't bother with this issue's installment of Murray R. Montgomery's Swords in Exile, another in a sort of anti-Musketeer series about Cardinal Richelieu's personal troops, because it was part five of six. I did read the conclusion of Walt Coburn's two-parter Town Marshal because the previous issue, containing part one, is at unz.org. It's a typical Coburn combo of violent and romantic passion, a vicious outlaw being offered a pardon in order to clean up a still-more vicious cow town where he encounters an old flame and the old enemy she married. Coburn teases a romantic triangle involving the outlaw-turned-marshal, the young woman who inherits a ranch, and her hotheaded boyfriend, but arranges for age-appropriate pairings by the end. I can't say whether whisky fueled the writing here, as it was often supposed to have in Coburn's later career, but there's an energy here missing in most of the other stories. I'm thinking of two pieces that hardly have business in a pulp magazine. In Elmer Ransom's "With Work to Do," a disgraced, widowed doctor befriends an injured beaver and spoils the animal until it's ostracized by its own kind, only to be inspired when the beaver mans up and takes charge in a crisis caused by the man himself. Don Tracy's "Bunny Rabbits" is inexcusable slop in which a newspaper circulation stunt offering rabbits as incentives to newsboys goes haywire. I guess the slicks wouldn't have these stories, but they seemed respectable to Argosy. Stuff like them was helping to kill the venerable weekly, on top of Munsey's self-destructive overexpansion over the last two or three years. For the next two Tuesdays we'll continue to follow Tarzan's misadventure and see if anything else is salvageable from these dark days for Argosy.
Posted by Samuel Wilson at 12:00 AM