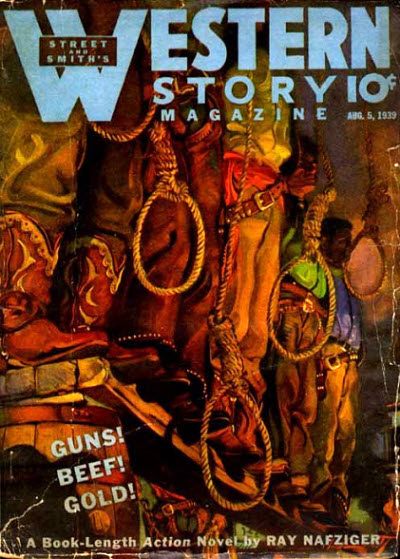 Guns! Beef! Gold! Rope! That's the grim implication of H. W. Scott's cover heralding Ray Nafziger's "book-length action novel" in this 1939 Western Story. At 50 double-column pages, "Guns! Beef! Gold!" comes closer to novel length than some stuff advertised as such. Nafziger was a prolific author during the 1930s and early 1940s, about whom little seems to be known. The FictionMags Index offers no birthdate but presumes him dead in 1946. Perhaps coincidentally, there's also a 1946 terminus for the presumably pseudonymous Mojave Lloyd, who has a story this issue. Was Lloyd Nafziger? No one seems to have suggested this, but I suppose it's possible. This issue continues Bennett Foster's serial Blackleg and features short stories by Van Cort (maybe better known as Wyatt Blassingame) and British-born L. L. Foreman. I've liked some of Foreman's stuff and while researching him I found out he won $3,000 in a 1947 contest sponsored by Outdoor Life magazine for an American Conservation Pledge, in which Rachel Carson of Silent Spring fame was the runner-up. Foreman wrote: "I give my pledge as an American to save and faithfully to defend from waste the natural resources of my country -- its soil and minerals, its forests, waters and wildlife." Foreman's pledge appeared regularly in the magazine until an updated pledge with a new emphasis on education was adopted in 1993. This just goes to show that pulp writers knew how to make money with words in many ways.
Posted by Samuel Wilson at 9:50 AM