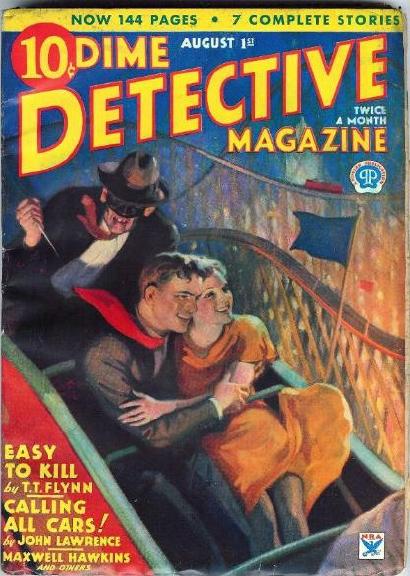 Here's an unusually colorful cover from Popular Publications' Dime Detective circa 1934, when the magazine was coming out twice a month. With this issue Dime Detective expanded from 128 to 144 pages, making it equal in size to Detective Fiction Weekly, but it shrunk back to 128 at the end of the year. Most of the stories in this issue feature series characters, two of them making their debuts. The headliner, T. T. Flynn's Izzy O'Shea, apparently didn't go over; he put in only one more appearance, according to the Fiction Mags Index. Hugh B. Cave had a little more luck with Peter Kane, who'd solve five more cases over the next year and then disappear for six years, resurfacing for three more stories in the early 1940s. "Calling All Cars!" was the third outing for John Lawrence's Cass Blue, who'd get three more from now through June 1935. This issue was the end of the line, however, for Maxwell Hawkins' Jones brothers, who made their debut almost one year earlier (on August 15 1933) and made six appearances overall. Donald Barr Chidsey, Allan Vaughan Elston and the ephemeral D. E. Winstead contributed one-off stories. There's also an editorial piece on "New Blood in Crime Writing." I wonder who got mentioned?
Posted by Samuel Wilson at 12:23 PM