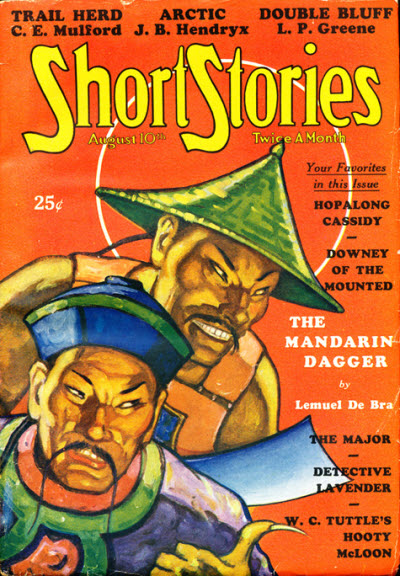 Of the "big four" general-interest adventure pulps, Short Stories seems to have depended the most on series characters when promoting itself. You could argue that Argosy hyped its star characters as eagerly, but I don't recall seeing the venerable weekly beat its chest the way Short Stories does over having four popular recurring characters in this 1933 issue. It is a formidable lineup, even if you don't count W. C. Tuttle's Hooty McLoon, who doesn't even rate a mention as a series character in the Fiction Mags Index. Clarence Mulford's Hopalong Cassidy is clearly the star, and some people today may still recognize the name. But L. Patrick Greene's Major, the African diamond buyer -- always accompanied by his capable sidekick Jim the Hottentot -- is another pillar of pulp fiction, and James B. Hendryx's Corporal Downey may have been pulpdom's most popular "Northwest" character until Black John Smith and the denizens of Halfaday Creek took over Hendryx's spotlight. Meanwhile, Vincent Starett's Jimmy Lavender had been a Short Stories mainstay since 1922, though this issue would prove to be his last appearance in the twice-a-month magazine. And that's not all! You also get a serial chapter from Jackson Gregory, a sea story by B. E. Cook and the "Mandarin Dagger" novella by Lemuel de Bra that apparently justified reusing a classic Duncan McMillan yellow-peril cover from February 1932. You'd think that while you were trumpeting new stories with all these popular characters you'd spring for a new cover that might show one or two of them. But I guess Short Stories, which had broken Adventure by expanding to 224 pages the previous year and would maintain a relentless twice-a-month schedule until 1949, had to economize somewhere, sometime.
Posted by Samuel Wilson at 12:20 PM