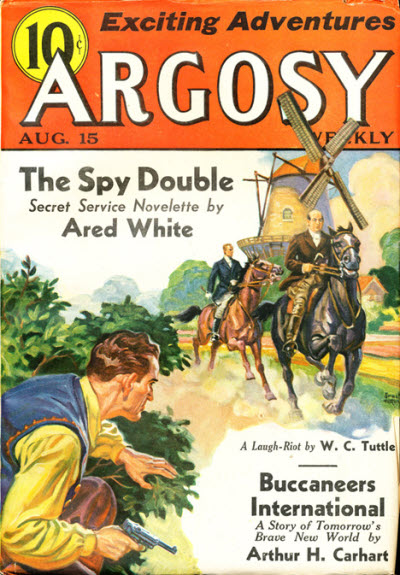 The Fiction Mags Index doesn't have a table of contents for the August 15, 1936 Argosy, but as I mentioned a week ago, someone recently scanned and uploaded the issue to the Yahoo pulpscans newsgroup. I now can provide that table of contents. 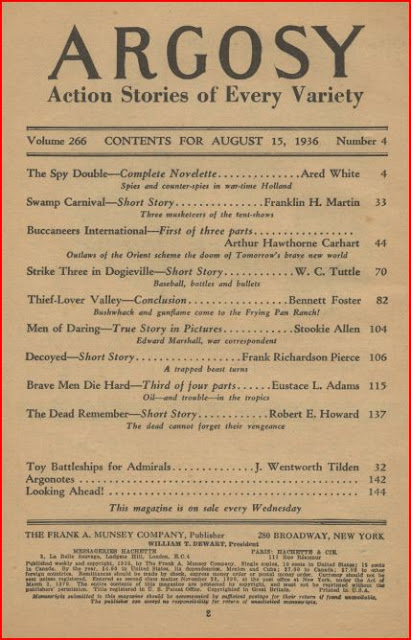 This issue is most noteworthy for beginning a posthumous run of stories by Robert E. Howard. A total of five westerns appeared before the end of the year. This issue's "The Dead Remember" was not Howard's Argosy debut; he'd actually placed the story "Crowd-Horror" back in July 1929. "The Dead Remember" is a chilling short story in what by default is Howard's late style: a pseudo-documentary format in which the story is told through letters, depositions etc. A cowboy writes to a friend predicting his own death, believing himself under a curse for having murdered a black man and his wife. For what it's worth, Howard invests the victims with more dignity than you might expect from him. There's room for queasy speculation about the cowboy's obsession with the black woman's checkered dress, how he writes of hallucinating so that a cloth he uses to clean his gun looks like a scrap of her dress. In classic horror-twist fashion, he dies because a scrap of the dress itself is wadded into his gun. Is this a supernatural transformation or did he actually take a hunk of the dress? Did he actually do more to the woman than shoot her? That aside, it's a nice distancing touch to have the avenging ghost introduced in someone's dry deposition, perfectly clueless as to the import of her presence. I don't care much for Howard's comical westerns, but this is strong stuff.

But if you like bad western comedy, this issue has one of W. C. Tuttle's Dogieville stories, though western fans (who don't like their genre mixed with spook stuff) will better appreciate the conclusion of Bennett Foster's Thief-Lover Valley. Ared White is this issue's headline author, and while I didn't like the one story of his I've read so far I suppose he deserves another chance. Arthur H. Carhart begins a sci-fi serial while Eustace L. Adams continues Brave Men Die Hard and Frank Richardson Pierce and Franklin H. Martin contribute short stories. For me this issue's main virtue is that it continues the Adams serial, of which I own the first two installments. I suppose the Howard story can be found in many places easily enough, but if you download this Argosy and read it for the first time there you're in for a treat.
Posted by Samuel Wilson at 7:51 PM