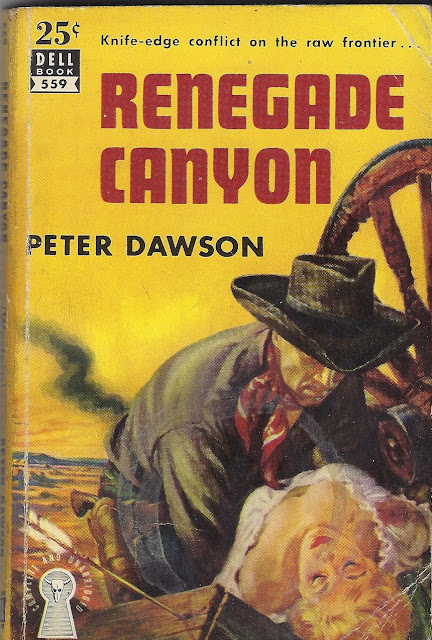 When Fred Glidden discovered how easy it could be to get stories published in the pulps, he made pulp fiction a family business, first recruiting his wife, then his older brother Jonathan. Fred was "Luke Short," for a time probably the best-selling western author in the country. Mrs. Glidden was "Vic Elder," who published in the western romance pulps until motherhood took too much of her time. Jonathan became "Peter Dawson," publishing his first stories under that name in 1936, not long after Luke Short's pulp debut. By World War II Luke Short had made it into the slicks. Peter Dawson kept on plugging in the pulps and finally hit paydirt with Renegade Canyon. It was his first western serial for the most popular of slicks, The Saturday Evening Post, running concurrently with Dawson's Stirrup Boss in Short Stories. Like Brother Luke, Brother Pete could breathe life into cliched situations by writing fairly uncliched characters. Renegade Canyon has a great big cliche at its heart. The hero, Dan Gentry, is a cavalry officer who's just been court-martialed and thrown out of the army for a "criminal and foolhardy action" that cost numerous lives. Only he and his faithful Sgt. McIrishman -- all right, it's McCune -- know the truth, which is that Gentry is covering up for a dead brother officer who committed the real foul-up. In melodramatic fashion, Gentry is covering up and taking the blame because his beloved, dying commanding officer is the dead loser's dad and might die all the sooner if he knew the truth about his boy. Gentry will not attempt to vindicate himself until after Major Fitzhugh passes on, which makes the Widow Fitzhugh, the Major's daughter-in-law, inpatient. She knew that her husband was a bum and she has the hots for Gentry, so she can't stand playing the dutiful widow for long. 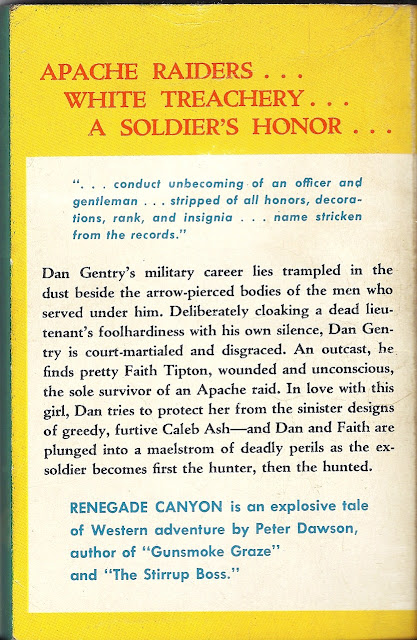 On his way to some sort of new life Gentry comes upon the wreck of a wagon train that had been sacked by Sour-Eye's Apache band. The scene has already been gone over by whites, but our hero finds what others missed: a living white woman hiding in a box.  Her survival interferes with horse trader Caleb Ash's plans to claim the salvageable goods as his own, and her infatuation with Gentry interferes with the Widow Fitzhugh's plans for Dan. Dan's main concern is how the m.o. of this attack matches the raid that wiped out his men. He suspects that greedy Ash had a hand in both attacks. Caleb's main line is selling remounts to the cavalry at extortionate prices; the cavalry unit that was massacred was seeking out a new supplier. Gentry and Sgt. McIrishman -- this is really unfair of me, since Dawson gives McCune only the lightest of brogues -- suspect that Ash provided intel to Sour-Eye's band in order to consolidate his market share. Worse yet, Ash is questioning the massacre survivor's identity as Faith Tipton because that would interfere with his claim on the salvaged goods. Caleb Ash is a thoroughgoing villain, but one of the virtues of Renegade Canyon is the way Dawson has him think and mostly act like a human being rather than a stock pulp villain. Ash reminds me a lot of the villains you saw in Budd Boetticher's movies with Randolph Scott; people who are just trying to get ahead in life like everyone else, but have made wrong, ruthless choices that ultimately make them irredeemable. That approach actually makes for more formidable villains, compared to the brutish bullies of inferior pulp. It helps that Dawson is really good at writing suspenseful action scenes. The highlight here is a long sequence in which Gentry has to escape from Ash, an excellent marksman who has him trapped in the hills, by setting a brush fire in the hope that the smoke will hide him. Ash isn't so easily eluded, and the last chapters nicely maintain suspense by keeping the villain offstage, building up our anticipation for what our hero knows to be his inevitable reappearance. Canyon is a good-sized western at 197 paperback pages, but it reads well and definitely holds your interest. It's the first Dawson novel I've read and I'll probably read more if they're like this one.

Here's what you get at the end of the book: a list of other Dell titles then on sale and an endpaper showing off the different keyhole logos Dell used for its four main genres: adventure, mystery, romance and western. 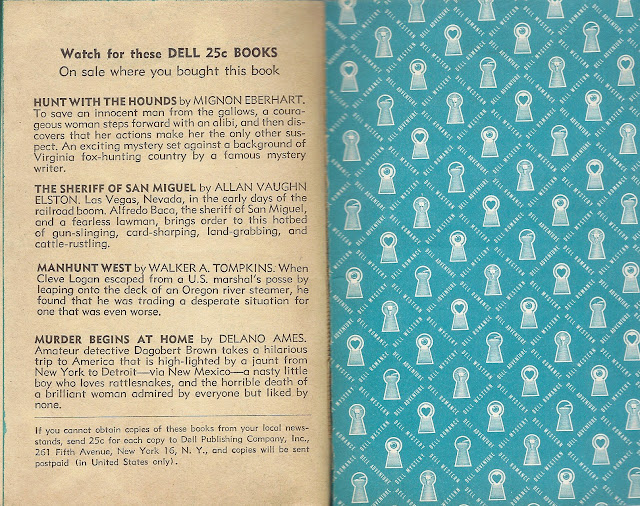 Posted by Samuel Wilson at 3:32 PM