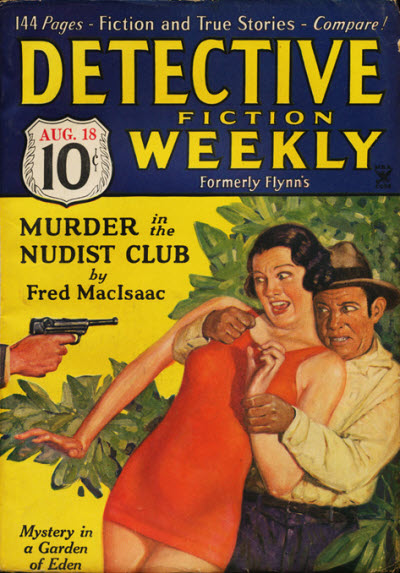 Oh, come on, cover artist! Don't tell me you couldn't do a better job teasing a story called Murder at the Nudist Club. If you couldn't, or if Detective Fiction Weekly wouldn't let you, than the Munsey Corporation should have left that title to the spicy pulps. Of course, Fred MacIsaac probably could get away with more in pure prose inside. While he launches his five-part serial, Richard Howells Watkins tries to start a series about a policeman named Pete Slocum with the novelette "The Crimson Harbor." According to the Fiction Mags Index, Slocum would appear only once more, in November 1934. For collectors and historians, Cornell Woolrich's second pulp story, "Walls That Hear You," is probably this issue's main attraction. You also get stories by Charles Molyneux Brown, Laurence Donovan, J. Allen Dunn and John H. Knox. If those names don't draw you, I suppose browsers in 1934 would at least have been curious to see the inside illustrations for the cover story.
Posted by Samuel Wilson at 12:47 PM