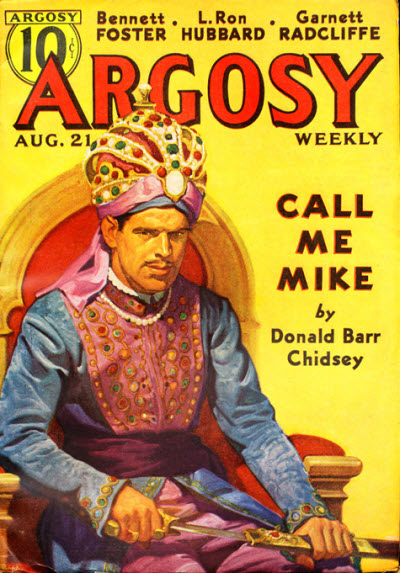 Here's a 1937 Argosy without a table of contents in the Fiction Mags Index. Fortunately, a site dedicated to the pulp writings of L. Ron Hubbard has this issue covered with a detailed table. For Hubbard fans or followers, this issue is extra-special because the great man has a letter in Argonotes along with his story "Nine Lives." In the letter, Hubbard defends "fast-production" writers like Frederick Faust and H. Bedford-Jones against snobby critics, crediting them with more nimble brains and "unconscious technique," while saying of himself that " If I write less than fifty thousand a month, my idea-machine practically breaks down." As was often the case in the second half of the 1930s, Donald Barr Chidsey gets the cover with the debut of a new series. "Call Me Mike" introduces Mikkud-Phni Luangba, heir to the real of Kamorriri, and his American companion/bodyguard George Marlin. Mikkud-Phni, aka "Mike," has adventures all around the world when he's not studying at Princeton. The running gag is that Marlin usually is forced into frantic action to rescue Mike, while the prince views everything with placid bemusement -- though he shouldn't be underestimated in a fight. Chidsey published at least three more Mike stories: two in September 1937 and one in 1940. There may be more, since the Mike series isn't recognized in the Fiction Mags Index. The first three stories have "Mike" in the title, but the 1940 story is "Flight to Singapore," and other Mike stories may be similarly obscured. I've read a couple of the Mikes, and they're mildly amusing, though you can see how they'd quickly grow monotonous. Along with these highlights the Aug. 21 issue features serial chapters from Bennett Foster, John Hawkins and Arthur Leo Zagat and stories by Frank Richardson Pierce (possibly a No-Shirt McGee), Garnett Radcliffe and Bertrand L Shurtleff. Hubbard's stuff was pretty entertaining in these early days of his career, so this issue's probably a pretty good overall package.
Posted by Samuel Wilson at 4:46 PM