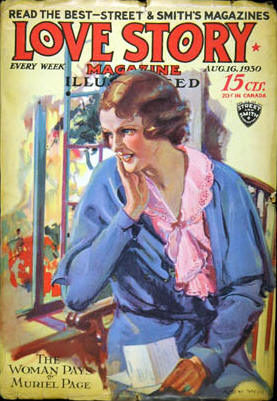 None of my usual magazine sources looked that good for this day, so it's about time I said something about the love pulps. There's actually not much I can say about them. They certainly were immensely popular in their day, but a glance through the Fiction Mags Index shows considerable modern neglect. Let's face it: romance is probably the last thing we think of today when we think of pulp fiction. It gets a pass from some when it's a genre hybrid like Ranch Romances that has some credibility as a western, but otherwise it has no place in what retroactively has been defined as a man's world. You see the same thing in the history of comic books; romance titles proliferated throughout the Golden Age of Comics, with Jack "King" Kirby as one of the leading practitioners, but you can't even imagine a market for romance comics today, nor could you have for the last forty years. Yet back when "pulp" meant a publishing format rather than a sort of meta-genre, you could not have thought of the word without respecting the popularity of romance pulps. Love Story (today's cover comes from 1930) was Street & Smith's most popular title for much of its existence, and in 1930 it apparently had the biggest page count of the publisher's weeklies. Like Western Story and Wild West Weekly, it maintained a weekly schedule until 1943, long after Detective Story had dwindled to twice-a-month and then monthly. Love Story died with most of the rest of the Street & Smith fiction line in 1949, but was revived by Popular Publications for a short run in the 1950s. Meanwhile, Ranch Romances outlasted all other pulps (those that didn't convert to digests or men's magazines, that is), albeit in much-diminished form from 1958 through 1971.

Needless to say I've nothing to say about the authors of this issue. I will note that the cover is exceptional, but not unique, in its lack of a man. The woman's beau presumably is represented by the letter in her hand. And that's all I've got. I do wonder whether there was as great a difference in content between pulp and slick romance as there was (leaving aside differences in literary quality) between pulp fiction as we understand it today and slick fiction in general. There may simply have been so great an appetite for romance fiction that the slicks couldn't hope to satisfy it. Now, of course, there are Harlequin Romances and their competitors exist to satisfy what appetite remains. Considering that paperback original romances continue to be published after the demise last year of the remaining western series paperbacks (in print, at least) and most of the Gold Eagle action line, I guess that appetite remains relatively healthy.
Posted by Samuel Wilson at 12:45 PM