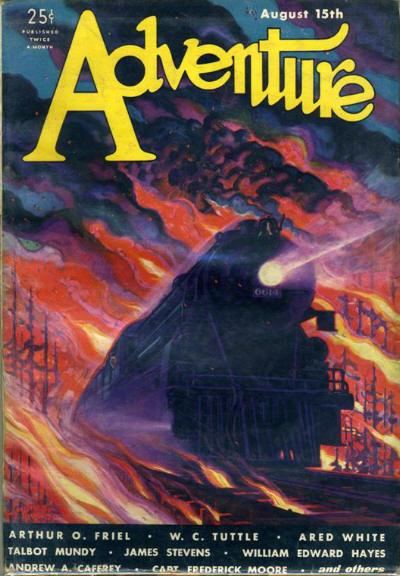 This 1932 issue marks the end of the line for Adventure in its classic 192 page form. With the September 1 number the perhaps-greatest of pulps slashed its page count by half, to 96 pages, and cut its price by more than half, from 25 cents to a dime. Adventure maintained its twice-a-month schedule until the end of May 1933, when it went monthly while raising the page count to 128 pages. Even then you got less for your dime, at least quantitatively, than in the weekly Argosy, while Short Stories, Adventure's most direct competitor continued to deliver 176 pages twice a month after its chicken-game jump to 224 in 1932. What happened to Adventure? I don't know the business end of pulp enough to say, but I know the reading end enough to say it didn't deserve this humbling. The magazine's decline after the 1927 departure of longtime editor Arthur Sullivant Hoffman is not self-evident to me. Hoffman's star writers still appeared regularly. The August 15 issue, for instance, features the opening of an Arthur O. Friel serial and the conclusion of a Talbot Mundy two-parter, along with a W. C. Tuttle short story. It also sports an Ared White spy story and fiction by Andrew A Caffrey, William Edward Hayes, Capt. Frederick Moore and James Stevens. Are they so awful? I leave it to more experienced readers to tell us. Regardless, Adventure was humbled, but survived the humbling thanks to Popular Publication and survived as a still-respectable pulp until 1953, and even then it still survived, after a fashion, into the 1970s. The one thing you can say for certain was that as of this day in 1932, Adventure's best days were definitely behind it.
Posted by Samuel Wilson at 12:33 PM