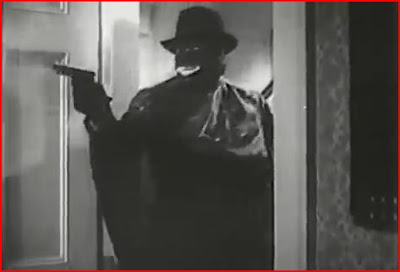 Nearly all our heroes were in peril at the end of the previous chapter. The Spider himself was trapped in a room with a gas bomb and killing steam, while Nita, Jackson and Ram Singh were shackled inside the archetypal flooding room. The first cliffhanger is hurdled easily as The Spider simply forces his way out a window. Meanwhile, The Octopus taunts the others via intercom, while Ram Singh vows to carve his name in the villain's heart. The Spider goes back into the trap house and takes out the goons operating the radio and speakers. He somehow figures out that his friends are in danger and pries open the airtight door to the flood room, clobbering two foes with the rush of water while he discreetly hops on top of a chair. After he frees his friends, Ram Singh notices that the two gangsters are coming to. Something violent is cut from the picture here, at least in the version I saw, for we now see The Spider and Ram Singh approaching the camera, and then we see the gangsters' bodies twitch and go limp. 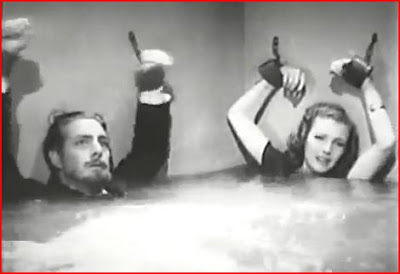 The Octopus is royally pissed at his men's latest failure to kill Richard Wentworth and his friends. ??, as the actor playing The Octopus is known for now, knows how to work his full-face mask to make it express his rage. He puts his long-term plans to dominate American utilities on hold for the moment to make destroying The Spider priority number one. 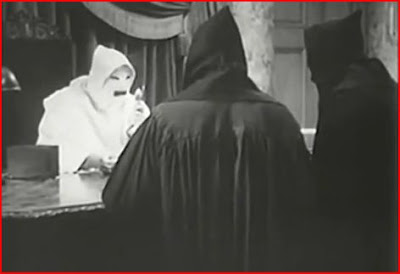 Learning through his underworld sources (i.e. Blinky McQuade's) that everyone's out to get The Spider, Wentworth switches up. His plan is to make a public spectacle of himself at a charity magic show in order to draw out The Octopus's men, if not The Octopus himself. He seems awfully confident that the bad guys will attempt some surgical strike on himself instead of bombing the bus station (i.e. the set from the chapter-one cliffhanger) where the charity show will take place. The Octopus takes the bait but complicates things a little by issuing a threat to Wentworth in The Spider's name. 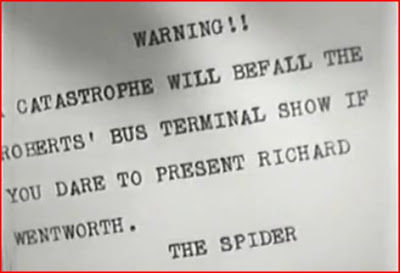 The Octopus's idea is that the bogus threat will draw the actual Spider to the scene, where he can then eliminate both his enemies at once. He still doesn't realize how easy that would be, but I'm not sure of the soundness of his plan.  Why wouldn't The Spider, presuming he was someone other than Wentworth -- as The Octopus must presume so far -- simply stay away on the assumption that the charity show will now be heavily guarded? For the plan to work, this theoretical Spider must assume that someone, presumably an enemy of his, actually will go after Wentworth. Of course, this criticism is moot because The Spider can't help but be there is Wentworth is. The funny part is that no one -- the press, the police and, of course, Wentworth, takes the fake threat seriously. Sending threats to the newspapers isn't The Spider's M.O., and as Wentworth asks, what would The Spider have against him. Wentworth's a crime fighter in his own right, after all, while The Spider, in Wentworth's words, is "a perfectly nice sort of fellow ... who goes around punishing people the law doesn't have time to catch up with." Wentworth's chat with Commissioner Kirk allows the latter to air anew his suspicions about Wentworth being The Spider, since Ram Singh had left his turban, lost when the bad guys clobbered him in the previous chapter, in the trap house which the cops found littered with corpses marked with The Spider's brand. Ram Singh, after all, is the only man in the entire city who wears a turban, isn't he? 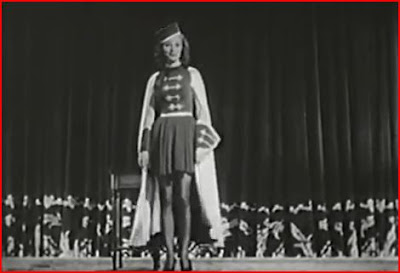 Does this make Nita Van Sloan a costumed crimefighter in her own right?

In any event, it's on with the show despite the dubious threat. Wentworth arranges to have the more suspicious spectators herded to one section of the makeshift theater, but The Octopus's chief goon (Marc Lawrence) recognizes the set-up and orders a cohort to head over to where a spotlight has been set up. The gangster sneaks up there and kayoes the lighting man, all unbeknownst to the security detail. They're the same people who let Lawrence into the bus station with a loaded gun, despite the publicized (albeit mocked) threat to Wentworth's life. Nita takes the stage in costume to introduce Wentworth, who immediately draws fire from Lawrence. Wentworth seems unhurt, almost as if the bullets hit a force-field. Why didn't they just blow the place up? That's what a real Norvell Page villain would do. Now The Spider appears, faster than the quickest change would make possible, to open fire on the gangsters. But now the wisdom of Lawrence's tactics becomes apparent, because The Spider has maneuvered himself into the perfect position for that goon up above to drop that spotlight on him. Thus ends a relatively uneventful chapter dominated by The Spider and Octopus trying to outwit each other. You still get the sense that The Octopus is somewhat more dangerous than the typical serial villain, but he clearly wasn't at his best this time. Let's wish him better luck next time, since The Spider's Web isn't even halfway done yet.
Posted by Samuel Wilson at 4:00 PM