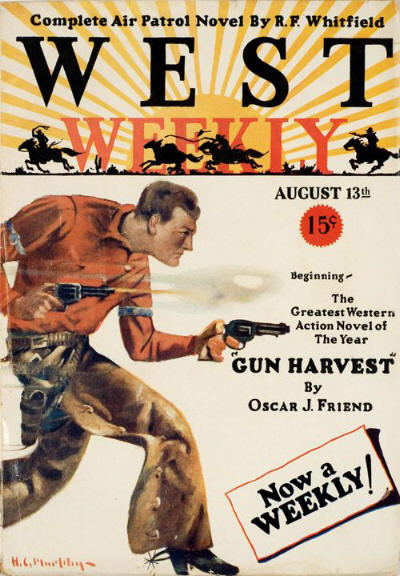 In 1927, after roughly a year and a half of existence, West celebrates its promotion from twice-a-month to weekly. Technically West switched to weekly on August 6, but I suppose this one's the first truly weekly issue in that it followed just one week after the previous number. The publisher couldn't maintain the punishing pace set by Street & Smith's Western Story and Wild West Weekly, however, and West relapsed to twice-a-month in November 1928. The noteworthy contributor this issue is R. R. Whitfield, better known as Raoul and best known for his stories, under his own name and as Ramon Dacolta, in the legendary hard-boiled pulp Black Mask. As with some other western pulps, for West at this time "western" was more a geographic than a chronological category. Hence Whitfield could publish "air patrol" stories here. He published five stories in West, but I leave it to the specialists to inform us whether all of these were air stories. The advertised star writer is Oscar J. Friend, whose Gun Harvest must have been bang-up stuff, since he really hadn't published enough to be advertised on the strength of his name. Maybe his sideline as a literary agent helped get him recognition here. Familiar oldtimers like Raymond S. Spears and Frank C. Robertson are also on hand, as are lesser-known names like Sig Young and T. von Ziekursch. West is supposed to be a pretty great western pulp but I haven't sampled one yet, though I'm increasingly tempted to do so.
Posted by Samuel Wilson at 5:41 PM