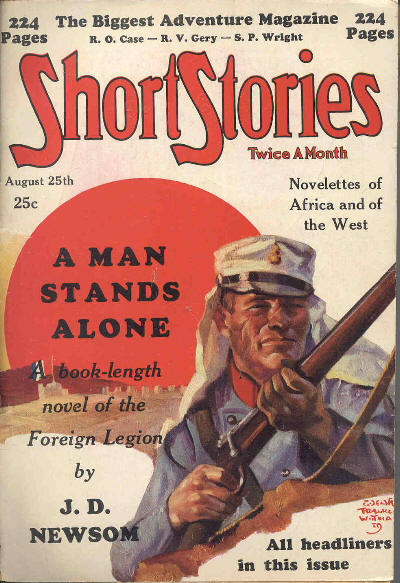 You can think of this 1932 pulp as Short Stories' victory lap. Back in March of that year, the Doubleday, Doran magazine increased its page count from 176 to a monstrous 224, with the obvious purpose of topping the 192 pages of its twice-a-month competitor, Adventure. Whether Short Stories had anything to do with it or not, in August Adventure cracked, cutting its page count in half while cutting its price from a quarter to a dime. Perhaps not coincidentally, this proved to be the last 224 pager for Short Stories. It reverted to 176 pages the following issue, September 10, and held that ground for another decade, all the while grinding out two issues a month long after Adventure had gone permanently monthly. But if the Aug. 25 issue as a whole is a victory lap, its "book-length novel," J. D. Newsom's A Man Stands Alone, was an 87 page slam dunk. I don't know how big the typeface was during this period, or how many lines there were to a column, but 87 double-column pages pretty much is a book-length novel -- and probably a good one, as Newsom was one of the top Foreign Legion writers. The rest is gravy: the conclusion of a Robert Ormond Case serial; novelettes by R. V. Gery and Ladbroke Black; short stories by Leo F. Creagan, Douglas Leach, Robert E. Pinkerton and Sewell Peaslee Wright. That's not quite the all-star lineup Adventure could publish at its best, and I don't know if I'd call them "All headliners," but in 1932 it would do quite nicely.
Posted by Samuel Wilson at 12:00 AM