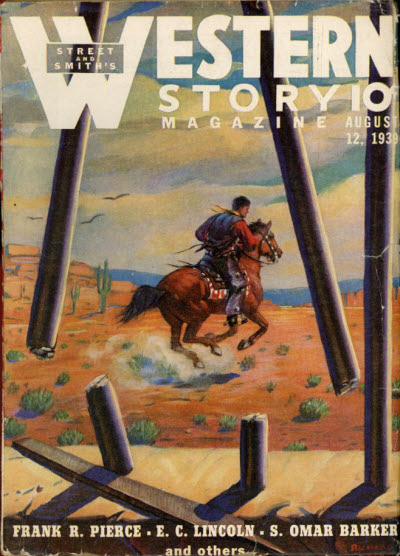 Richard Case isn't quite on the level of H. W. Scott as a pulp cover artist, but I still like the concept of this 1939 Western Story cover. This particular issue is another twofer for Frank Richardson Pierce, who has a novella under his own name and a short story under his Seth Ranger alias. Among the contributors, E. C. Lincoln is the most unfamiliar to me. He'd been writing for Western Story since 1925, though his bibliography isn't as long as that time span would suggest. Lincoln published all of four stories from 1933-5 before picking up the pace again starting in 1936. 1939 was actually his busiest year since 1931, with nine stories appearing in Western Story. Like fellow contributor S. Omar Barker, Lincoln is best known today for his poetry rather than his prose. Jack Sterett and Bennett Foster round out the lineup of fiction writers this time out. I doubt whether August 12 was a Friday that year, but Case's cover is a good image for that day of the week.
Posted by Samuel Wilson at 12:24 PM