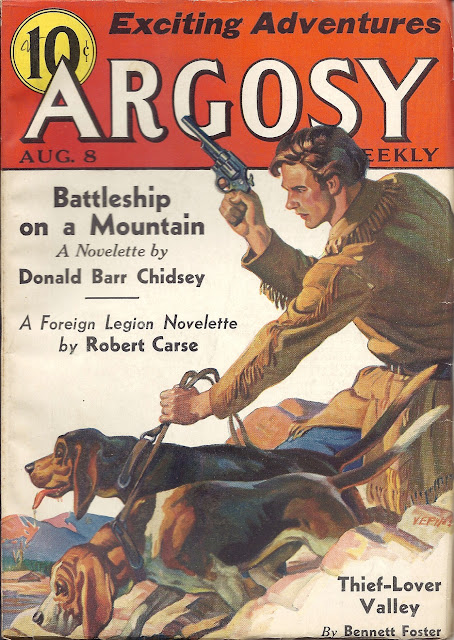 My 1936 Argosy collection is growing slowly but surely. It's practically virgin territory because unz.org had only one issue from that year -- the first, in fact -- in its pulp trove. There's plenty to get in 1936, but it'll be a more expensive year than either 1934 or 1935, where my collection has been concentrated so far. That's because Edgar Rice Burroughs returns to Argosy after a hiatus, L. Ron Hubbard begins to place stories regularly, and Robert E. Howard has a posthumous run of stories. For instance, I bought this issue because, along with novelettes by the dependable Donald Barr Chidsey and Robert Carse, is continues a four-parg serial by the also dependable Eustace L. Adams. I have the August 1 issue where Adams' Brave Men Die Hard begins but chose to break the Munsey monotony with a Dime Detective last week. The August 15 issue, with the third installment of the serial, might have proven more expensive than any Argosy I've bought to date because it contains Howard's "The Dead Remember." Fortunately, just a few weeks ago some kind person uploaded a scan of that issue for Yahoo's pulpscans newsgroup. That just leaves me August 22 to catch up with, and I don't think Johnston McCulley or even Cornell Woolrich command such prices as Howard does. But let's not get ahead of ourselves. 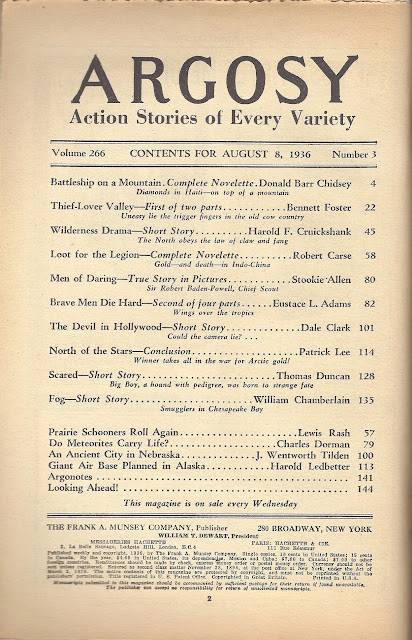 The cover this week is a little confusing to me, because the V. E. Pyles painting seems to be illustrating Bennett Foster's western serial Thief-Lover Valley (given the buckskin-clad hero) rather than Chidsey's "Battleship on a Mountain," though the more popular author's name is more prominently placed. "Battleship"is set in Haiti, which proves to have been a popular setting for pulp fiction, what with its violent history, its voodoo mythos and its provocative racial contest. Robert Carse had been there before and would return, but his base of operations this week is Indo-China. Foreign Legion specialists like Carse, Georges Surdez and J. D. Newsom arguably gave Americans their first hints, or perhaps first warnings, of what the Vietnam experience would be for any "imperialist" power. Pulp stories set there make for especially fascinating reading, though I haven't read this issue yet to judge Carse's effort. I did take enough of a look at Dale Clark's "The Devil in Hollywood" to satisfy myself that the title didn't refer to Clark's continuing character, the sleazy talent agent J. Edwin Bell. Instead, "Devil" appears to a genuine horror story rather than Clark's typical Hollywood comedy. As for the rest, I look forward to describing some of them in more detail in the future. I can say now that this issue of Argosy was sponsored by: 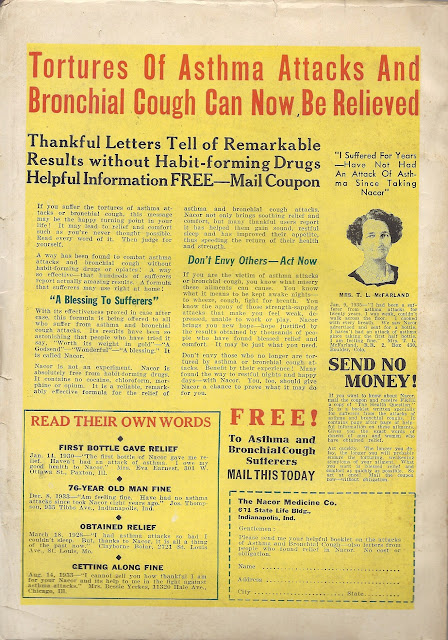