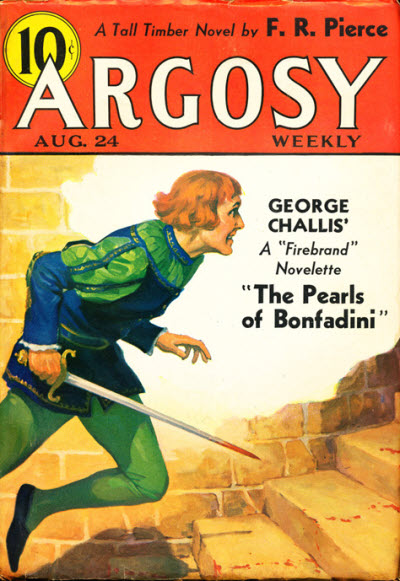 Frederick Faust's last story about Tizzo the Firebrand -- written, like all the others, under the alias of George Challis -- was actually the first of the series that I read. It was the only complete Firebrand story in the unz.org Argosy trove, but it was impressive enough to inspire me to start a Tizzo collection of his original appearances. "The Pearls of Bonfadini" concludes a sequence of four novelettes (following three short serials) in which the half-English, half-Italian redhead -- who favors an ax despite the sword shown on the cover -- falls into then fights his way out of the orbit of Cesare Borgia. Tizzo enjoyed meteoric success as an Argosy character, appearing on seven covers between late November 1934 and this end point in August 1935. Whether "Pearls" was meant to close the series all along or circumstances prevented Faust/Challis from writing more, I don't know. Regardless, the series is a classic of swashbuckling.

In addition, Frank Richardson Pierce begins a three-parter, Silver Thaw, that can be had complete at unz.org, while Faust continues the western serial The Sacred Valley under his more familiar identity as Max Brand, and concludes The Blackbirds Sing under the even less familiar pen-name of Dennis Lawton. The issue's fourth serial is part two of Borden Chase's Bed Rock, another of his dangerous-job tales of tunnel-digging sandhogs. The only real standalone stories this issue -- admittedly, you can enjoy "Pearls," as I did, without having read the earlier Tizzo pieces -- are Foster-Harris's action piece "The Rattler Whirs" and a gruesome short by Houston Day, "Cure for the Headache." This issue may be a little Faust-heavy for some, but it's still another outstanding Argosy from what I consider the venerable weekly's peak period. Browse through it at your leisure through this link to unz.org.
Posted by Samuel Wilson at 12:27 PM