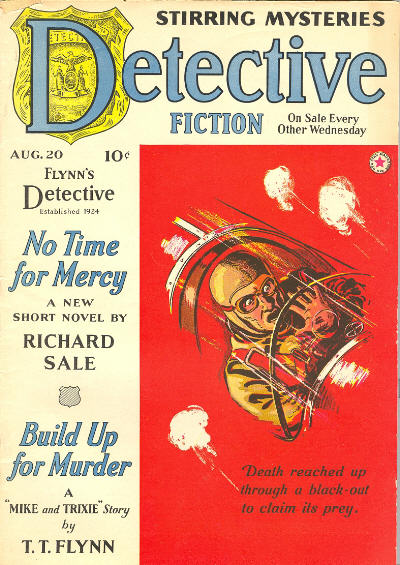 Something important is missing from this 1941 cover: the word "Weekly." Since its founding as Flynn's in 1924, this magazine had maintained a weekly schedule as the stablemate of Argosy for the Munsey corporation. Now Munsey could maintain that schedule no longer, crippled by a harebrained brand expansion that had shown few results. The last weekly issue bore an August 2 cover date. How much time passed between that issue and this one appearing on newsstands I don't know. In any event, Detective Fiction now became a true biweekly title, as opposed to "twice a month" magazines like Short Stories that always were dated the 10th and 25th of the month. If there were five Wednesdays in a month, as would be the case in November 1941, you'd get three issues of Detective Fiction. That situation didn't last for long, however, since with Munsey's fortunes still dwindling Detective Fiction became a monthly in April 1942. Popular Publications took over in 1943, but while they upgraded Argosy into a long-running men's magazine, they finally killed Detective Fiction in the summer of 1944, only to revive the title for a short-lived mini-pulp in the 1950s. As you see, Munsey had come up with some ugly packaging for the former DFW that would only get uglier over the next year. Inside, you could still find familiar faces, whether authors like Richard Sale or characters like T. T. Flynn's Mike and Trixie (who made their last appearance until 1951 in this issue) or J. Lane Likletter's Paul C. Pitt. But there's no denying that a once-mighty magazine was a shadow of its former self in more ways than one.
Posted by Samuel Wilson at 6:30 PM