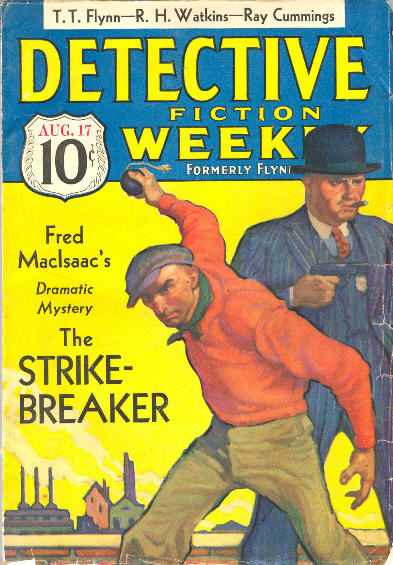 I wonder whether The Strike-Breaker is the hero or villain of Fred MacIsaac's 1935 Detective Fiction Weekly serial. Is he the scruffy fellow with the bomb, the natty man with the badge, or neither? Either way, the serial is something I'd like to read for what it might tell us about pulp attitudes toward organized labor at a time of high tension between labor and capital. Along with MacIsaac, DFW sees fit to hype stories by T. T. Flynn, Richard Howells Watkins and Ray Cummings, the latter continuing his sci-fi "Crimes of the Year 2000" series with "The Bandit of Pontoon 9." There are also short stories by two old-timers: Robert McBlair, who'd been writing since 1915, and Robert W. Sneddon, who started back in 1912. There's also a ghost-written serial memoir, I Was a Public Enemy, a column on "Weird Weapons of Gangland," and an article on "The Rat of Rat River," among other nonfiction items. An intriguing package, overall.
Posted by Samuel Wilson at 12:00 AM