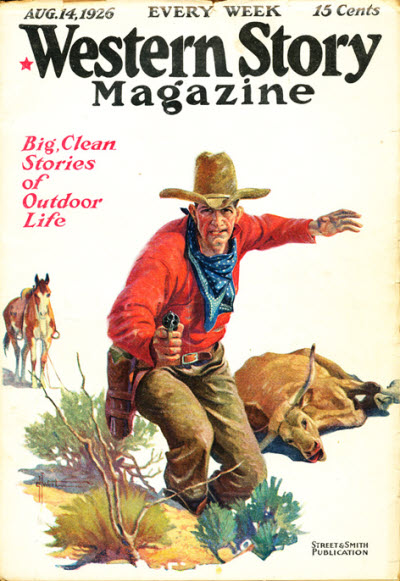 This 1926 cover doesn't have the visual imagination of Western Story covers from 1939, but it has a simplicity and directness of design that makes it just as appealing. While the cover doesn't promote any of the authors in the issue, it has some familiar names inside. Frank Richardson Pierce returns to one of his first successful series characters with a tale of Flapjack Meehan. Pierce created Flapjack back in 1921 The novella "Flapjack Blows It Up" was the character's 43rd appearance as counted by the Fiction Mags Index, and the third Flapjack story of the year. From this point, however, Pierce began to lose interest; Flapjack would not appear again until November 1927, and then only five times more (including the serial Flapjack Meehan in Street & Smith's Far West Illustrated) over the next three years. Meanwhile, Robert Ormond Case introduces a new character -- or so we can safely assume, since all his stories bear his first name -- in Windy Delong. An aggressive attempt was made to put Windy over; he'd appear in two more novelettes in the next three weeks. The character appeared more sporadically thereafter; thrice in 1927, twice in 1928 and 1929; once in 1930 and 1931. He then showed up thrice more between 1934 and 1937. Frederick Faust has a serial running under his John Frederick alias, while Joseph B. Ames continues The Man From Wyoming. There's also a novelette by Harry Golden, who was actually Harold de Polo, and short stories by Harry Adler, Austen Hall and E. E. Harriman. The cover promises "Big Clean Stories of Western Life," which may or may not be a benefit depending on what you mean by "Clean."
Posted by Samuel Wilson at 4:08 PM