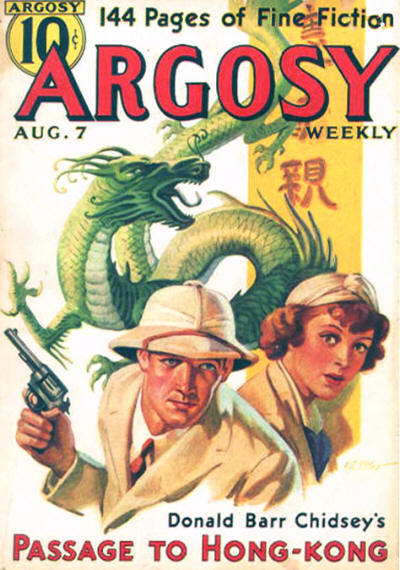 During the years 1936-37 Donald Barr Chidsey was one of the dominant Argosy writers. He was on a particular tear in the summer of 1937, landing the cover three times in a two-month period. He specialized in fast-moving adventure tales in exotic settings and "Passage to Hong Kong" is typical of his output at the time. It's probably the best thing in this issue, which also includes a No-Shirt McGee south-western (the old sourdough got around!) by Frank Richardson Pierce and a Four Corners American gothic by Theodore Roscoe. The serials are Luke Short's King Colt, which wraps up this issue, John Hawkins' Strike and Arthur Leo Zagat's Drink We Deep, an exercise in the microscopic world subgenre of what were then called fantastics. Short stories by Berton E. Cook and William Corcoran round out a typically diverse issue from this era. Chidsey will return tomorrow in a 1936 issue from my own collection.
Posted by Samuel Wilson at 3:11 PM