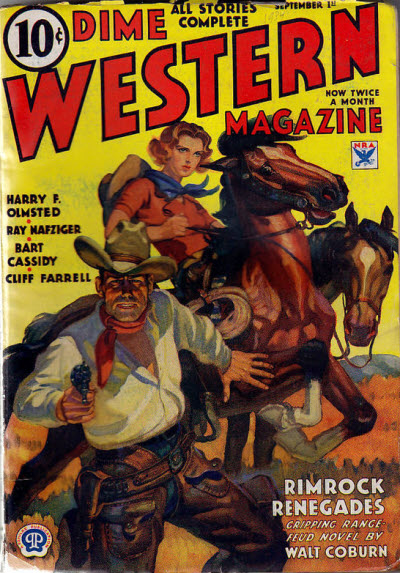 With this 1934 issue Popular Publications' Dime Western, which started life as a monthly in December 1932, made the jump to twice-a-month status. Like most pulps on that schedule, it carried the 1st and the 15th of the month as cover dates until reverting to monthly in December 1935. Over that time thirty issues of Dime Western were published. Walt Coburn, this issue's featured author, appeared in 27 of them. That's impressive, but if Harry F. Olmsted wrote all the Tensleep Maxon stories attributed to "Bart Cassidy," then he appeared, under one handle or the other, in every single issue. Ray Nafziger was nearly as prolific as these two, while Cliff Farrell only began to pick up the pace, at least as Dime Western was concerned, in 1935. This is pretty much an all-star lineup except for short story contributor Stewart Van der Veer, an occasional alias for one Lurton Blassingame.  If any of the big names dropped out for a couple of weeks, T. T. Flynn and others were on hand to take up the slack. I haven't read Dimes from this far back, but based on what I've read from the Forties the quality level was consistently high here.
Posted by Samuel Wilson at 12:38 PM