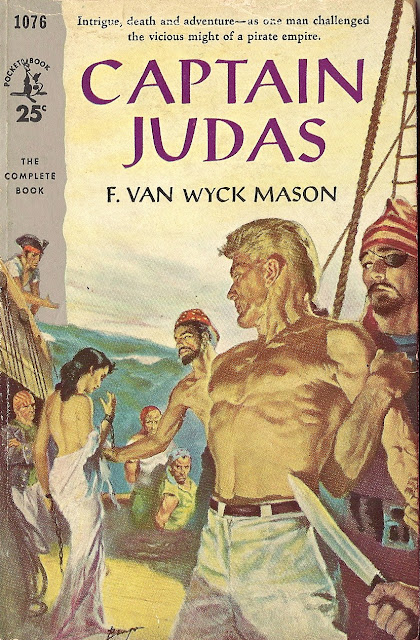 When paperback books -- or pocket books, to distinguish them from bulkier 21st century paperbacks -- supplanted pulp magazines,  pulp writers outside the detective and science fiction genres had to satisfy an appetite for novels rather than short stories or novelettes. For many pulp veterans there was an easy way to satisfy this demand: convert old serials into novels. That's what F.V.W. Mason, already a busy novelist in the historical adventure and spy stories, did with the many serials he published in Argosy. Captain Judas, for instance, appeared exactly 85 years ago in the venerable weekly. 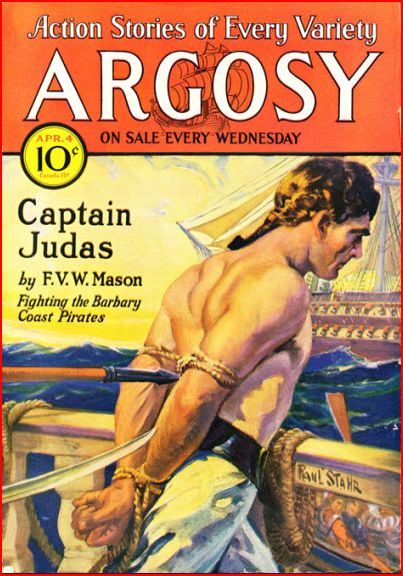 Pocket Books assures us that "This edition of Captain Judas was completely rewritten" by Mason, who clearly took advantage of the opportunity to make the language slightly saltier with a few "bastards" and at least one "son of a bitch." The Pocket Books edition seems just a little large for a pocket book at 234 pages, but Mason might not have needed to add too much to a six-part serial.

Amos Trent is a rugged American sea captain during the Jefferson administration with a grudge against the family who set him up to be court-martialed and dropped by the U.S. Navy, while pining for the family's beauteous daughter, Dorothea Sayles. He's manipulated into fighting a duel with Dorothea's brother in the middle of a high-society soiree, and the slight wound he suffers gives rival captain Arnold Estes a head start on a big payday with a much-wanted shipment of sugar. Trent tries to catch up but is burdened by unexpected passengers: Dorothea, her friend Sally Severn and Sally's banker father. While Dorothea is refined and retiring, all beauty but little brain -- her nickname is "Dodo" -- Sally is vivacious, hoydenish and witty, and her Paris fashions look like "near nudity" to the unsophisticated Trent. Still, he finds herself warming to her as she shows grace under increasing pressure. Trent's ship is beset first by the British Navy, seeking alleged deserters to impress, and then by the dread Barbary Pirates, who capture the ship with intent to enslave the surviving crew and passengers. Dodo and Sally are doomed to the harem unless Trent can convince the mirant, a Scots renegade turned Muslim corsair, to hold them for ransom in defiance of the local bashaw's will. The women are subjected to the ultimate humiliation of being paraded around naked, but Sally takes it like a trouper, while cowardly, selfish Dodo leaps at the chance to become the wife of the odious Arnold Estes who, also captured, sells out to the Muslims, converts and is made an officer. Trent, whom Estes framed for selling out an escape attempt, decides that since his people already see him as "Captain Judas," that he may as well convert himself as the only way to save Sally from transport to Constantinople. The odd thing here is that wild Sally finds that a step too far -- not that Trent doesn't feel guilty as sin himself. "What chance of the least happiness would we have, with me knowing you'd denied your God for me and you knowing I made you do it?" she protests. Not to worry: Amos Trent still has an exit strategy for both of them.... 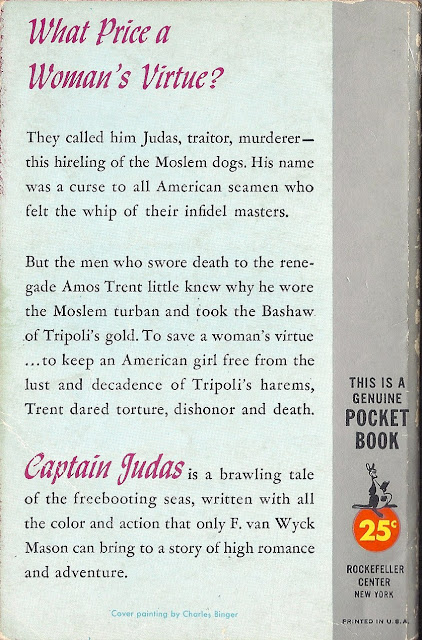 Captain Judas is to a degree a riff on Rafael Sabatini's The Sea Hawk -- not to be confused with the virtually unrelated Errol Flynn film of the same name -- in its focus on a Christian who turns renegade Muslim corsair. The story, with its dread of conversion, probably has fresh resonance in the 21st century, and may serve as a corrective in spirit to a more recent paradigm that portrays pirates and corsairs as a kind of primitive egalitarian democracy in which religion matters little. Authentic Muslims actually figure little in the story, as our hero deals mostly with the Scots renegade, who gives Mason an opportunity to play with dialect more, unsatisfied, presumably, with having given Trent a Scots sidekick. Modern readers find dialect of any sort repellent but, for good or ill, it was part of the music, so to speak, of pulp fiction, and Scots dialect, at least, isn't as stigmatizing as other possibilities. For the record, the Sayles family has a black butler but Mason goes a little easy on his dialect and fortunately the butler doesn't get much to say. Returning to Islam, Mason avoids casting aspersions on the faith itself, having Trent note while studying for his conversion that "it was the human distortion of Mohammedism that had made it a hateful creed, as the Inquisition had twisted Christianity into a grim mockery of its intended philosophy." The hate is real in the story, however, and readers today may be less inclined to dismiss it as a pejorative "Orientalist" fantasy -- though on the other hand the more likely you are to know what "Orientalism" is, the more likely you may be to see it everywhere. Enough of academia, though: the main point of this novel is exotic action, and Mason delivers the goods, from an early riot that menaces poor Dodo to the later naval action. He writes in an easy, readable style that makes Captain Judas an acceptable page turner. I have more Mason in my pulp collection, including most of his irreverent Macedonian serial Lysander of Chios (1935), and on the strength of Judas I'll be on the lookout for his novels in the used-book stores I haunt both locally and farther afield.
Posted by Samuel Wilson at 9:00 AM