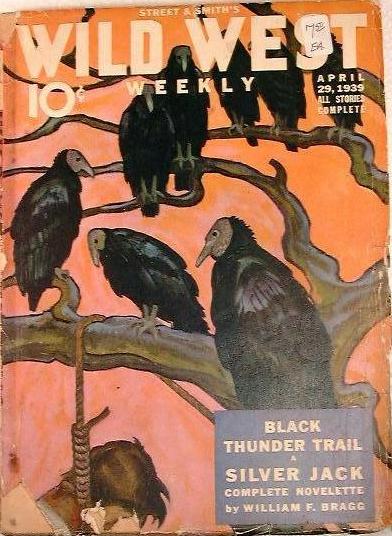 Wasn't Wild West Weekly the lighter, more kid-friendly or Street & Smith's western pulps? I guess that means Western Story would give you the whole body of the hanged man, viewed from the front. Having the carrion birds dominate the cover while relegating the hanged man to a corner was a typical eccentric artistic device of Street & Smith circa 1939. It doesn't seem to promise kiddie fare, but the kiddies may have been made of sterner stuff back then. There was plenty of comfort writing inside, however.  J. Allen Dunn's Bud Jones is the senior series character this issue, having had adventures since 1927. William F. Bragg's Silver Jack Steele dates back to 1932, while Norman A. Hay had been writing Ricky McKee tales as William A. Todd since 1935. Much more recently, Lee Bond (writing as Andrew A. Griffin) had just started a weekly series of six novellas about Cliff Merchant of the Flying X the previous issue. One author, Frank Carl Young, apparently made up a totally original cast of characters that he never used again. Wild West Weekly apparently had at least one stand-alone short story every issue, but it's not as if the casual reader would have felt lost reading about long-lived series characters. I doubt that continuity was so tight in those days that you couldn't have understood the latest Silver Jack story without reading the last one, much less all of them -- but maybe I'm wrong.
Posted by Samuel Wilson at 12:00 AM