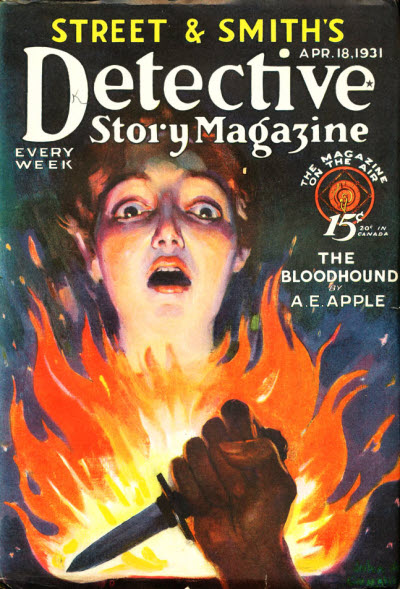 This will be brief, since I'm no more familiar with Street & Smith's stable of Detective Story writers circa 1931 than I was last week. But this is another awesome cover that I couldn't pass up. Of the contents, I'll note this issue's one series character. Charles W. Tyler had been writing adventures for Big Nose Charley since 1917. "Big Nose Charley - Gentlemun" was the 31st in the series according to the Fiction Mags Index. An extensively-researched biographical sketch at the Mystery*File website describes Tyler as "perhaps the most prolific pulp writer you have never heard of." According to this article, Big Nose Charley proves to have been a criminal, not a crimefighter, but the series is meant for laughs. It seems like you'll find a lot of forgotten men (and probably women) in Detective Story, but then a couple of weeks later you'll have Johnston McCulley, Erle Stanley Gardner and Edgar Wallace all in one issue. It might be more interesting to discover the unknowns, but I'm more an adventure and westerns man, so I'll probably leave the spadework to others.
Posted by Samuel Wilson at 12:00 AM