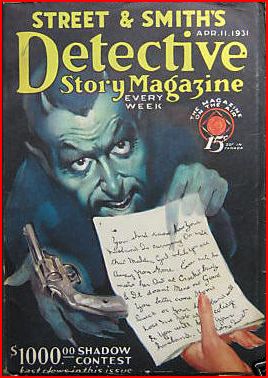 I'm getting to like the cover designs on early-1930s issues of Street & Smith's Detective Story. Like their late-Thirties western covers, these benefit from a lack of verbiage, to the point where this and many contemporary issues aren't even promoting any of the stories inside. That's all right with me since I know none of the authors in this particular issue, with a particularly tempting cover, except Barry Perowne, an English author (writing pseudonymously) whose main gig was as the authorized chronicler of E. W. Hornung's archetypal gentleman thief, Raffles, after Hornung's death. His story, the second installment of a three-part serial reprinted from the English story paper The Thriller, introduced Perowne's own creation, J.L. "Rick" LeRoy, who continued to appear sporadically through the Thirties. You'll notice that Street & Smith is more interested in promoting The Shadow, who in April 1931 graduated from mysterious narrator of the Detective Story radio program to pulp hero in his own right. The character doesn't appear on the covers of his earliest issues. During that time, Street & Smith were running a contest offering a cool grand (it'd be like winning fifteen grand now) for the best physical description of the mystery man. Since February, Detective Story had been offering "clews," for so they were called spelled then, to help readers piece The Shadow together. This issue appears to be the last to offer a clew, but for some time afterward the weekly kept that microphone logo as part of its cover design to remind readers that Street & Smith were out to be kings of all media. With The Shadow eventually making it into movies, comic books, etc., they definitely made a good try.
Posted by Samuel Wilson at 12:00 AM