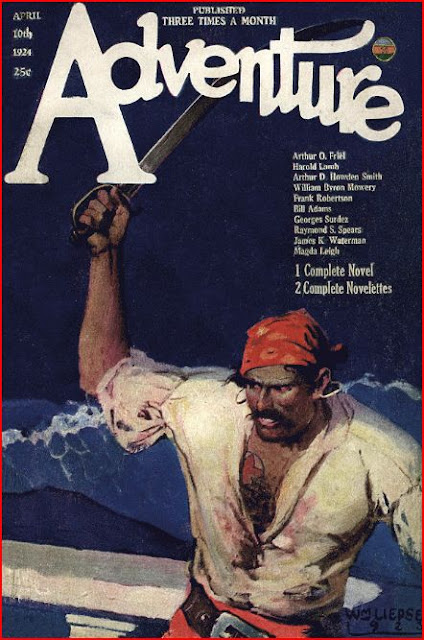 This is Adventure going full blast. The April 10, 1924 issue assembles four of the magazine's mightiest writers, all with outstanding stories. Harold Lamb leads off with a massive 70+ page novel, The Making of the Morning Star, in which an English crusader encounters Lamb's Three Palladins, i.e. Genghis Khan and his Mongol companions, one of whom spends much of the story in disguise luring our hero to Tartary. You get a breather as Frank Robertson contributes a surprisingly entertaining story about sheep shearers; James K. Waterman offers what passes for a short-short in Adventure, a four-pager about blowing up whales with bombs, marred by a ship's cook's amosandandian dialect; and Bill Adams philosophizes for two pages. Then comes the third installment of Arthur O. Friel's four-parter The King of No Man's Land, an epic entertainment even on its own concerning men carving out empires in South America and running afoul of the established governments. This serial was the third outing of Friel's hero team of McKay, Knowlton and Ryan; the first, The Pathless Trail (1921) is available for download at the Internet Archive and is definitely a must-read for me. Following Friel is William Byron Mowery's grim tale of a northwest manhunt, "The Lob-Stick," a brief essay from Arthur Gilchrist Brodeur on "The Nordic Race," and a poem by Harold William Gleason. Then Georges Surdez takes over with his novelette "The White Man's Way." Surdez strays from Foreign Legion territory here but is as good as ever telling of a French colonial officer leading black troops into foreign territory to retrieve stolen rifles and falling in with an Italian officer who proves worse than he seems. Surdez is a little more racist toward Africans than he usually is toward Arabs ("Their business was killing. Thinking was the white man's.") but he's too good a writer not to invest the more important African characters with virtue and dignity, and as an adventure writer (both small a and capital A) he hasn't disappointed me yet. Our final intermission includes a sea story by a rare female contributor, Magda Leigh, a western short by Raymond S. Spears, and a poem about a returning war veteran by Leonard H. Nason who, had he appeared in prose, would have made it five titans this issue. As it is, the fourth is Arthur D. Howden-Smith, who tells another tale of Swain the Viking, who may be the most stone-cold badass hero in all pulpdom. Swain's salient characteristic is that he takes crap from absolutely no one. In "Swain's Justice" he feuds with a peer who makes the fatal mistake of bitching about his share of plunder from their last expedition. Howden-Smith writes with an archaic terseness that seems just right for Swain and his milieu, and he closes out the fiction section of this tremendous issue on a high note. After all that, there's still pulpdom's greatest letter column, "The Camp-Fire," in which Magda Leigh tells us about herself, while editor Arthur Sullivant Hoffman comments on an Army scandal, rants as usual -- lest you think "gun nuts" are a more modern phenomenon -- against contemporary gun control efforts, and publishes comments on a fascinating variety of subjects. Possibly the most amazing thing about this 192 page issue is that the publishers assumed that readers would be ready for another same-sized dose just ten days later. You, however, can take your time savoring pulp at one of its peaks after downloading this issue from the link below.