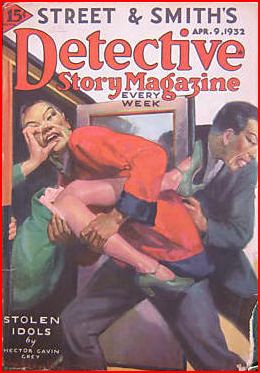 The Yellow Peril is on the prowl on this 1932 Detective Story cover. It's actually a pretty good cover, all the more suggestive by hiding the victim's face and letting her legs and fingernails do the talking. Unfortunately, I can't say much about the issue apart from the cover -- and I don't know who painted that -- because none of the authors except Leslie T. White is familiar to me. The presence of an openly female writer should be noted, however. Charlotte Dockstader contributes the last of a series of stories dating back to 1928 about Spud McGee. Dockstader wrote for Detective Story for most of her career, which dated back to 1923, but around this time she was starting to diversify. She'd place stories in Detective Fiction Weekly and Ten Detective Aces the following year. Of Hector Gavin Grey, the author of the story illustrated on the cover, I know absolutely nothing -- except, now that I've looked him up, that this immigrant from Scotland killed himself in 1941, aged 41, but sealing himself inside a coffin. Apparently, writing pulps got to some people. Makes me want to read something by the guy.
Posted by Samuel Wilson at 12:00 AM