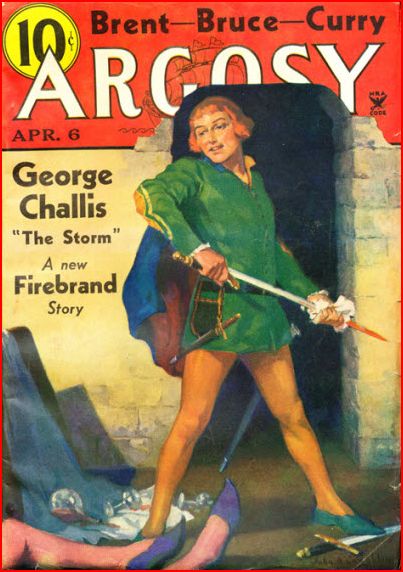 As was often the case in 1935, George "Frederick Faust" Challis's Tizzo the Firebrand gets the cover of this issue of Argosy, but while I enjoy the Firebrand stories they really should have given the cover to Peter the Brazen. Loring "George F. Worts" Brent's "Over the Dragon Wall" is the final appearance of his beloved Orientalist hero and a direct sequel to the 1934 serial Kingdom of the Lost. That serial ended on a stunning note with the apparent death of Peter's longtime girlfriend Susan O'Gilvie as a heroic sacrifice. In this coda to the entire series Brent takes that back in order to set up a romantic finale following the hero's hunt for a supposed dragon, commissioned by an American circus, in the Himalayan foothills. I don't know whether contemporary readers saw Susan's survival as a copout -- I remember seeing an "Argonotes" writer some time earlier demanding that she be killed -- or whether Brent/Worts was responding to popular outrage over her death. In any event, "Dragon Wall" was his final word on the subject and the beginning of the author's gradual withdrawal from Argosy and the pulps. As for the Firebrand, in The Storm Tizzo proposes to liberate his English mentor (and probable father) from a Perugian prison, cutting quite the swashbuckling figure along the way. Along with Brent and Challis this issue has a pretty solid lineup, including war-story specialist George Bruce, who was popular enough to have magazines named after him, and the outstanding action author Tom Curry. Bruce's "Tomorrow We Die" traces the feud of two American soldiers from the Boxer Rebellion to World War I, while Curry's "Jungle Guillotine" is characteristic Devil's Island adventure. In addition, you get an Anthony M. Rud animal story, H. H. Matteson's "Hind Hide," which lost me with all the silly nicknames he sticks on his characters, and the third installment of Fred MacIsaac's serial The Wild Man of Cape Cod. 1935 is my favorite Argosy year and this issue gives you a few reasons why. You can sample it for yourself by following this link to unz.org.
Posted by Samuel Wilson at 12:00 AM