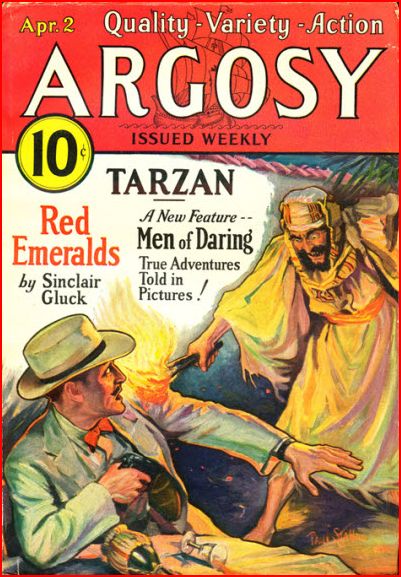 Here's something modern readers can identify with: an Arab peril! This 1932 cover presumably gives a scene from Sinclair Gluck's serial Red Emeralds. I was surprised to see that Gluck wasn't a very prolific pulpster. I found some of his Argosy stories with his series character Dan Brice in the unz.org trove, and the very first Argosy I bought for my own collection, a 1934 issue, had a Gluck story in it. It proved mediocre but the Brice stories were pretty good. I'd give this serial a chance, especially given the apparently exotic setting. The latest Tarzan serial continues, as do serials by Theodore Roscoe (a two-parter, really) and Thomson Burtis. Dependable Eustace L. Adams has a short story while veteran western writer J.E. Grimstead contributes a novelette and Charles S. Verral makes his fiction debut with "The Sharpshooter." One M. L. McEuen publishes his (or her) only pulp story this issue, "Don't Get Rough With a Lady." Most noteworthy of all is the debut of Stookie Allen's "Men of Daring," a weekly one or two-page comic in the style of Ripley's Believe It Or Not dedicated to courageous men as well as the occasional Women of Daring. Allen continued the feature for nearly ten years, publishing his last comic at the end of 1941. Some readers complained about the subtraction of a page or two of fiction, but I appreciate how the comic breaks up the monotony of the sparsely-illustrated Argosy and the content seems consistent with the magazine's commitment to action -- not to mention quality and variety.
Posted by Samuel Wilson at 12:00 AM